Located in Nelson Lakes National Park in the Nelson/Tasman region

Climb onto the St Arnaud Range for spectacular views of the surrounding area. 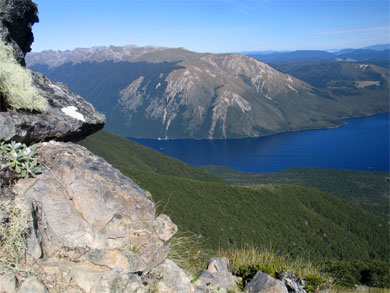 This walk climbs steadily through beech forest to a height of over 1650 metres.

Above the bushline (at 1400 metres) after a 2 hour climb, there are spectacular views from Parachute Rocks, which gained their name from a parachute-shaped gravel scree located just to the north.

The track climbs for a further 30 minutes from here to the ridge line, where you are rewarded by spectacular views of the surrounding area: east down the Wairau Valley, north to Mt Richmond Forest Park, west towards Kahurangi National Park and the Buller Valley, and south to the rest of Nelson Lakes National Park.

Return via the same route.

The track starts in the eastern corner of Kerr Bay, on the edge of Lake Rotoiti in St Arnaud.

The lower slopes are dominated by large red beech, with a healthy sub-canopy of other species, such as broadleaf andputaputawētā. Higher up, silver beech and finally the hardy mountain beech take over. Note how the mountain beech becomes progressively stunted as you climb higher to the bushline.

The lower section of the walk crosses moraine terraces deposited by past glaciers. The truncated spurs of St Arnaud Range are evidence of further glacial action at higher altitude. Advancing rivers of icecut off the ends of the ridges and, on the eastern side, gouged out the many small basins where small tarns now fill hollowsleft by the melting ice.