Six whio will be released on Mount Taranaki on 26 February as part of a project re-establishing a self-sustaining whio population in Egmont National Park.

The Minister of Conservation the Hon Maggie Barry will join local iwi, DOC staff and a group of school children known as ‘Whio ambassadors’ to release the whio.

The local population on Mount Taranaki was functionally extinct by 1945 due to stoats and rats. “Without stoat trapping, chick survival would be nil and nesting females, moulting birds and naive captive released birds would be vulnerable”, said Biodiversity Ranger Joe Carson.

The predator programme in the park covers 7,500 ha, using 1,160 double-set DOC200 traps to provide adequate protection for breeding whio. Traps are checked by DOC rangers and dedicated volunteers fortnightly over the peak breeding months when ducklings are most vulnerable.

The first successful breeding was recorded in 2005 after a trapping programme began in 2003. The population was reintroduced using birds reared in captivity, boosted by WHIONE (Whio Operation Nest Egg) and the survival of wild chicks from successful breeding seasons.

From extinction in the 1990s there are currently 33 confirmed pairs on the monitored rivers and a census conducted in 2015 using dog teams counted a total of 86 birds. 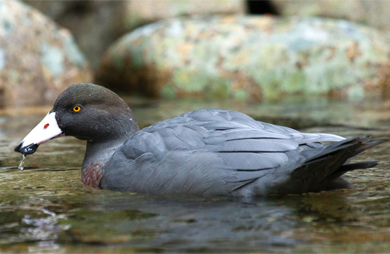 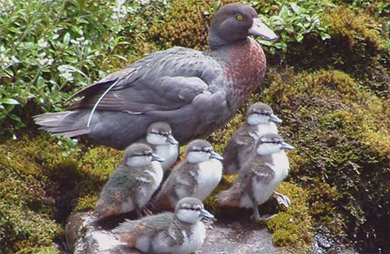 So far this season 29 ducklings have been located and DOC staff, iwi and local whio ambassadors look forward to these numbers increasing.

Genesis Energy and DOC have partnered together in a five year programme to secure the future of this unique vulnerable native bird. Operating under the name of Whio Forever this partnership is fast tracking implementation of the national Whio Recovery Plan to protect whio and increase public awareness