The Department of Conservation are encouraging the public to check the source of their native firewood as a Rotorua resident was recently charged with theft of timber from a scenic reserve. 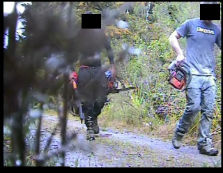 A still shot from the surveillance footage taken at the scene.

The Department of Conservation is encouraging the public to check the source of their native firewood after a Rotorua resident was recently charged with the theft of timber from a scenic reserve. The timber was on-sold as firewood.

DOC rangers had located two areas in a Mamaku reserve where live tawa trees had been felled and partially removed. DOC Ranger Paul Cashmore explained "It was clear the timber was being removed for firewood, and the offenders may return to remove the remaining timber."

The department subsequently installed covert surveillance equipment and when the thieves returned, clear images were obtained leading to one of the offenders being identified by police. He was subsequently arrested and charged with theft of native timber. 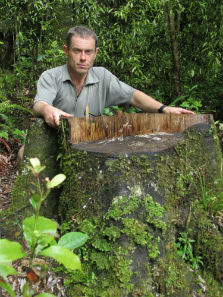 DOC Ranger Paul Cashmore at the site of the timber theft

"Some of the trees felled were more than 100 years old and significant to the forest ecology" said Mr Cashmore. Vegetation had also been cleared to gain access to the timber. "These trees weren’t wind fallen. They were mature, living trees which play an important role in the forest ecosystem."

The offender appeared for sentencing in Rotorua District Court in March and was sentenced to five months community detention. He was also ordered to pay $710 reparation for his role in the theft and destruction of his trailer and chainsaw were ordered.

"If you buy native firewood off the side of the road or from a new source, please take the time to ask where the wood came from. Theft of native timber from reserves is an ongoing concern for DOC" said Mr Cashmore.