Eighteen rare native parakeets are today winging their way from Christchurch to a Bay of Plenty island sanctuary to build a self-supporting population there as this species faces the ongoing threat of predators in Canterbury.

Eighteen rare native parakeets are today winging their way from Christchurch to a Bay of Plenty island sanctuary to build a self-supporting population there as this species faces the ongoing threat of predators in Canterbury.

The kākāriki karaka/orange-fronted parakeets bred by the Isaac Conservation and Wildlife Trust at Peacock Springs will be released on Tūhua/Mayor Island—ancestral home of Te Whānau Ā Tauwhao ki Tūhua.  The Tūhua Trust Board worked with DOC to make Tūhua predator-free in 2002. 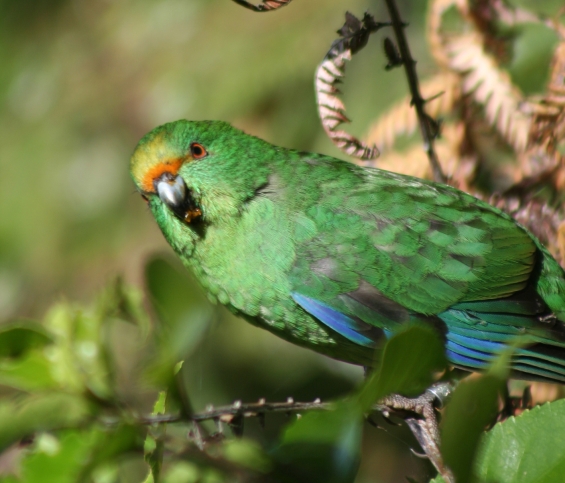 Meanwhile, the mainland population of this critically endangered parakeet—found only in three alpine valleys—seems to be benefiting from beech seeding but is at risk from a predicted plague of rats and stoats later in the year.

DOC ranger Simon Elkington says that they are monitoring nine parakeet nests in the Hawdon and Poulter valleys in Arthur’s Pass National Park compared to seven for this time last year.

“After a slow start nesting is looking good this year due in part to more food being available to the birds from the beech seed.”

Results from DOC’s seed-shooting work in the Hawdon valley last month and other observations point to a beech mast (seeding) this year, he says.

DOC will measure the amounts of beech seed produced as it falls off the trees over the next couple of months, to gauge the quantity of food for rodents.

Rat and mice levels in the valleys are at present at low levels but are expected to start ramping up in late autumn as the seed falls from the trees.

Predator levels will be monitored to determine whether a pest control response is required later in the year as part of DOC’s Battle for our Birds programme.

The captive breeding programme at Peacock Springs is a crucial part of conserving orange-fronted parakeets, which number between 200 and 400 in the wild.  Birds bred at the centre supply ‘insurance’ populations on four predator-free islands.

The birds are being flown to Tauranga courtesy of Air New Zealand, as part of its partnership with DOC, and Fauna Recovery New Zealand has provided the helicopter to fly the birds from Rotorua Airport to Tūhua.  Te Whānau Ā Tauwhao ki Tūhua will receive the birds on Tūhua as owners of the island.

Orange-fronted parakeet is one of our rarest parakeet/kākāriki species and nationally endangered.

Once common throughout New Zealand, it now survives in just three beech-clad valleys on mainland New Zealand—the Hawdon and Poulter valleys in Arthur’s Pass National Park and the South Branch of the Hurunui in Lake Sumner Forest Park.

Stoats and rats pose the greatest threat to these remaining small populations.  Parakeets nest in tree holes and the eggs, chicks and sitting adults are easy prey for these tree-climbing predators.

DOC manages the risks to the parakeets by intensively monitoring predator densities in all three valleys and undertaking pest control using a combination of traps and aerial 1080 when necessary.

A beech mast 14 years ago drove rat and stoat levels to plague proportions and decimated the South Island populations of orange-fronted parakeet.

‘Insurance’ populations of this species have been established on four predator-free islands: Chalky Island in Fiordland, Blumine and Maud islands in the Marlborough Sounds and Tūhua in the Western Bay of Plenty, off Tauranga.

The parakeets were first moved to Tūhua in 2009 and are doing well on the island.