Rare duck numbers on the rise

It's good news for New Zealand's rarest duck, the pāteke, or brown teal, with recent flock counts in Northland showing the biggest population since surveys began in 1988.

It's good news for New Zealand's rarest duck, the pāteke, or brown teal (Anas chlorotis), with recent flock counts in Northland showing the biggest population since surveys began in 1988.

"The main reason for the increase in numbers since 2001 is intensive predator control by landowners and community groups in and around core pāteke areas – increasing pāteke survival and breeding success. Farmers who put in ponds and wetlands and plant the margins with native vegetation are creating extra habitat that also benefits pāteke," says Thalia Sachtleben, Department of Conservation pāteke Ranger.

"Public awareness of pāteke has also increased – people are more careful driving at night in core pāteke areas and don't let dogs wander. It's wonderful news for our rarest duck and shows how working in partnership can achieve tangible conservation outcomes – something DOC is keen to grow," says Thalia. 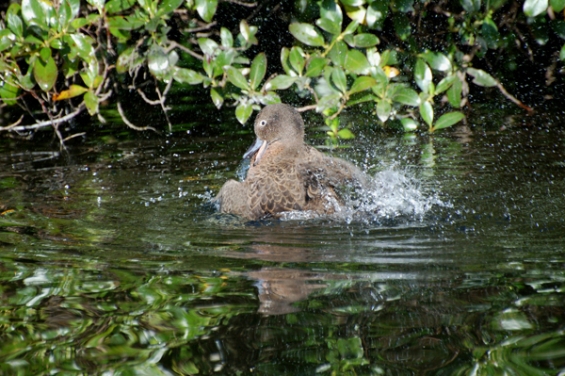 Counts began in 1988 at traditional flocking sites around Mimiwhangata, Whananaki and the Bay of Islands, with new sites added as additional pāteke flocks were discovered. New flock sites may arise from changes in the pāteke population and/or alterations to pāteke habitat.

The nocturnal pāteke are distinguished from other ducks by their small size and distinctive white ring around their eyes.

How you can help to protect pāteke: