Pest numbers down in Waitutu Forest

Pest control has knocked rats and stoats down to undetectable levels in the Waitutu Forest in Fiordland National Park giving native birds a respite to rear their young this spring.

Pest control has knocked rats and stoats down to undetectable levels in the Waitutu Forest in Fiordland National Park giving native birds a respite to rear their young this spring.

The Department of Conservation Battle for our Birds pest control operation in August used aerially-applied 1080 poison over 30,000 hectares of lowland forest. The operation targeted rodents and possums with secondary poisoning of stoats to protect endangered birds such as South Island kākā.

Monitoring last month showed that rat and stoat tracking rates had dropped to zero percent from 22 percent and 40 percent, respectively. Mice dropped from 70 percent to 17 percent. Possum monitoring will be carried out this month.

DOC Fiordland Conservation Services Manager Lindsay Wilson says this is an excellent result and will give forest birds a much greater chance of successfully rearing their young this spring and summer.

“Our long term monitoring at Waitutu shows that kākā and other forest birds are increasing as a result of this type of pest control.”

DOC staff will be doing further bird monitoring this month including bird counts at more than 700 listening stations in a 2000 hectare area of the forest.

DOC would like to acknowledge the support of the Waitutu SILNA (South Island Landless Natives Act) land owners in protecting the Waitutu forest ecosystem, and also the grant from the Nature Heritage Fund for the pest control operation. 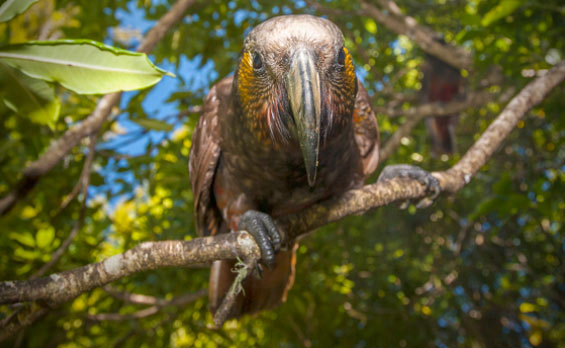 Waitutu is a nationally significant lowland mixed podocarp and beech forest and site for mistletoe plants. It is a stronghold for South Island kākā and has a small remnant population of endangered mōhua/yellowhead, as well as significant numbers of other forest birds such as robin, ruru/morepork, kererū and riflemen.

DOC has monitored forest birds annually at Waitutu since 2005 and carries out bird counts at a grid of over 700 individual listening stations in a 2000 hectare area.

Results show that robin numbers had more than doubled in that time and South Island kāka had also increased. Other bird species such as kākāriki and bellbird also appear to have responded to pest control but population trends haven’t been established yet. Mōhua are in too small numbers to register a response through this monitoring method yet.

The Waitutu treatment area includes private Māori land. DOC works with the Waitutu SILNA land owners to protect the forest ecosystem from introduced pests under a covenant agreement between the owners and the Crown.