Abundant beech seed in these valleys has fuelled a rat and mice plague, and was set to cause an explosion in stoat numbers this summer.

“A rat and stoat plague could spell the end of orange-fronted parakeets in Canterbury.

“The last major beech seeding in 1999 and 2000 wiped out orange-fronted parakeet and mōhua in the North Hurunui and decimated numbers of both species in the other alpine valleys.” 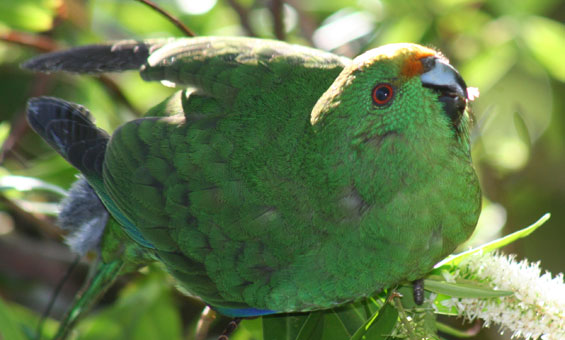 Since then, a combination of on-going trapping, and aerial 1080 in beech-seeding years, has seen the parakeet population stabilise.

Pest control will also protect the mōhua population – recently boosted with the transfer of 58 birds from Fiordland to the Hawdon valley, backed by the Mohua Charitable Trust.

“The new birds will be settling in and looking to nest and raise their young, so it’s important we protect them from rats and stoats at this time,” said Turner.

The application of biodegradable 1080-laced cereal baits over the target area follows its treatment with non-toxic 'pre-feed' bait just over a week ago.

The operation followed stringent safety procedures and buffer zones were in place around huts and significant waterways.

Warning signs advising the public about the risks of the pesticide and poisoned carcasses are in place at all entrance points to the area.

Get more information on DOC’s Battle for our Birds pest control response.