Young fur seals are a common sight on our beaches and shoreline at this time of year. They are many newly weaned seal pups and juveniles aged nine to 10 months. They have left their mothers and come ashore as they strike out on their own. 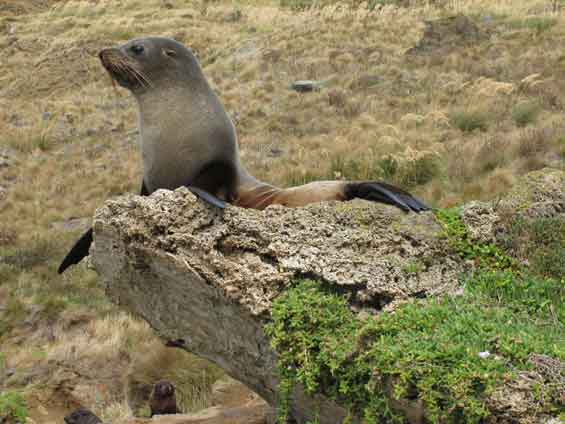 The biggest threats to seals are humans and dogs. DOC Conservation Services Manager for Coastal Otago David Agnew said, “These young seals are very vulnerable to dog attacks. It’s essential that dog owners keep their dogs under control (and even better on a leash) when there’s a seal on the beach.”

“The majority of dog owners are doing the right thing, but they have to pay the price for the minority who are not being responsible.” David said.

“We remind people that it’s an offence under the Marine Mammals Protection Act to disturb, harass, harm, injure or kill a seal. A dog owner whose dog attacks a seal could face prosecution.”

Anyone charged under the Marine Mammals Act with harassing, disturbing, injuring or killing a seal faces a maximum penalty of two years’ imprisonment or a fine to a maximum of $250,000.

DOC is grateful to members of the public who phone the DOC hotline about any injured seal. “The majority of these seals are healthy but we want to know straight away if a seal is badly injured, tangled in netting or being harassed by dogs or people,” David said.

Other Otago wildlife such as yellow-eyed and little penguins are also vulnerable to dog attacks. “We encourage people to watch and enjoy our fascinating wildlife but please ensure they are kept safe for everyone to enjoy,” says David.

DCC is the agency that oversees compliance with dog control bylaws. Senior DCC Animal Services officer Peter Hanlin said it is the responsibility of owners to keep their dog under control at all times. He urged people to report dogs that aren’t under control to the DCC.

How to watch seals safely

When to call DOC about a seal

Once the New Zealand fur seal lived and bred right round the coast of New Zealand. But they were hunted for more than 700 years, first by Maori and then from the 1790s by European sealers.

Sealing was finally banned in 1894. Since then their numbers have been rising and gradually fur seals have been re-colonising our coastline.