A young male New Zealand fur seal seen near the Motueka Recreation Centre is healthy and just relaxing in the area.

A young male New Zealand fur seal seen near the Motueka Recreation Centre is healthy and just relaxing in the area.

Over the last couple of weeks, DOC has received a number of calls about the fur seal, and is monitoring its presence.

The fur seal has been assessed by veterinarian Mana Stratton, who has confirmed that the seal is in a satisfactory condition and behaving like a normal healthy seal.

“It is a young male and most likely a weanling. The mothers wean their pups around September, because they need to build up their body condition before giving birth again in late November through to mid January.

“The New Zealand fur seal can be very laid back on land and tolerate close encounters which leads to concern it is unwell, when in fact it is enjoying just having a rest.”

The seal’s presence is a good sign that the population in the Tasman area is at last making a comeback. This will provide more people with the opportunity to see these amazing animals.

Motueka Services Manager Mark Townsend says, however, that it is very important that people are respectful of all wildlife at all times and this includes the fur seal. 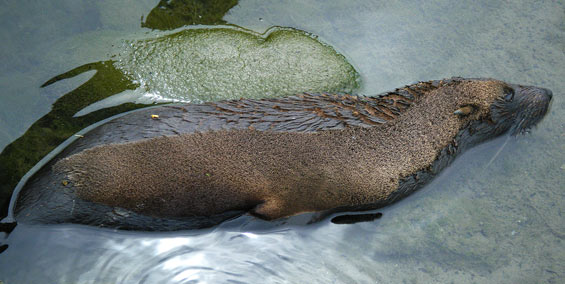 “The best way you can help is to be careful driving down roads where seals are known to be nearby. When out walking do not approach a seal, only take photos from a distance. A frightened seal will bite in defence as it tries to escape.”

“If you are walking with a dog in an area where there might be seals, such as the waterway near the Motueka Recreation Centre, then you are advised to keep your dog at your side at all times. Using a lead is advisable as a closely approaching dog is still harmful to wildlife.”

The public are asked to contact DOC if they have concerns about the seal.