The Department of Conservation (DOC), Penguin Place, the Yellow-eyed Penguin Trust and volunteers are supplementary feeding starving yellow-eyed penguin chicks during one of the most disastrous breeding seasons in recent years.

Penguin Place on Otago Peninsula, the Katiki Point Penguin Trust in North Otago, and volunteers, with the support of the Department of Conservation (DOC), are supplementary feeding starving yellow-eyed penguin chicks during one of the most disastrous breeding seasons in recent years.

A shortage of food for the chicks has resulted in low numbers of chicks surviving to three months and low weights, DOC ranger Mel Young said. The lowest weight recorded this season was 1.7kg in the Catlins compared to a healthy size of 5.5kg. “This is the worst season I’ve ever seen and it’s not over yet. We’ve still got a large number of juveniles (one-year-olds) that are due to moult, and then the adults. Moulting may be delayed if these birds are compromised, which will only lead to higher losses of yellow-eyed penguins on the Otago coast.”

A later than usual start to the breeding season, which resulted in eggs hatching up to four weeks later than other seasons, was likely to have contributed to the severity of the event. Chicks are usually assessed and tagged around 80 to 90 days of age, once they have reached maximum measurements.

Mel said less than 70 chicks on the peninsula had survived to 90 days of age, compared to over 200 last season. “We’ve removed chicks from the wild for supplementary feeding to give them a better chance of survival, but most importantly we do this to take pressure off the adults before they moult.”

Staff from Penguin Place on Otago Peninsula, the Yellow-eyed Penguin Trust and DOC began their annual chick health-checks in January in the Catlins and on Otago Peninsula, with assistance from wildlife veterinarian Lisa Argilla and vet students from Massey University.

Volunteers from the Katiki Point Penguin Trust recorded the lowest number of chicks per pair in North Otago since monitoring began, and dangerously low chick weights.

The majority of chicks in the Catlins and North Otago were in extremely poor condition and unlikely to survive to fledge in a few weeks time. 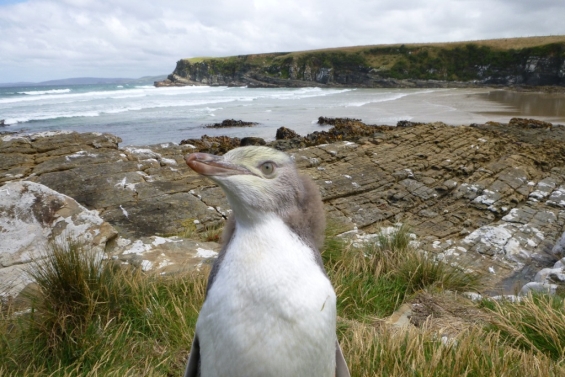 On Otago Peninsula, the season had been a tragedy from the beginning, Penguin Place’s rehabilitation coordinator Julia Clement said. “Adults were coming home and not feeding their chicks,” she said. Staff at Penguin Place attempted to supplementary feed chicks at their nest to make up for the shortfall, but the majority of the chicks succumbed to starvation and secondary infections. Many of Otago Peninsula’s nests were reduced to just one chick, with very few adults managing to feed two chicks.

Penguin Place Manager Lisa King said the generosity of fishing companies and other businesses which responded at short notice had been greatly appreciated. Donations had been made by fishing companies Sanfords, Harbourside Fish, United Fisheries and Talleys to meet the needs of the 74 yellow-eyed penguins being held in temporary captivity. “We urgently need more fish and would like to hear from fishing companies if they can help,” Lisa said.

“We’ve had to supplementary feed an average of 100 penguins a year for three years in a row, so we’ve had to double the size of our hospital to accommodate them,” Lisa said.

Yellow-eyed Penguin Trust general manager Sue Murray said, “The trust is concerned that this pattern of low chick weights has been observed at their own reserves located at North Otago, Otago Peninsula and the Catlins. The vulnerability of the species is emphasised with events such as this and last year’s adult mortality event thought to be caused by a marine toxin. The penguin population will not be sustained if, in the future, there continues to be poor breeding years. Further conservation research is urgently required to ensure the continued survival of this endangered species along our eastern coastlines.”