A kākāpō chick has hatched in the wild on Hauturu o Toi/Little Barrier Island, less than two years after a small adult population was re-introduced to the island.

A kākāpō chick has hatched in the wild on Hauturu o Toi/Little Barrier Island, less than two years after a small adult population was re-introduced to the island. 'Heather One' in the nest on Little Barrier Island

Kākāpō Recovery programme manager Deidre Vercoe Scott said all chicks were doing well but the team was particularly thrilled with the successful breeding on Hauturu o Toi/Little Barrier. “Kākāpō were first introduced there in 1982 and had some success breeding there, although they needed supplementary food.”

They also needed protection from the kiore (Pacific rat) and in 1999 all kākāpō were removed so the rats could be eradicated from the island.

A total of nine kākāpō have been transferred to Hauturu o Toi/Little Barrier Island since 2012, but this time they haven’t been given any supplementary food.

The successful mother – Heather – mated three times with Dobbie. Both birds had previously lived on the island. She produced three eggs but only two were viable. The second was transferred to Whenua Hou/Codfish Island to ensure that when it hatched the chick didn’t have to compete with its older sibling in the nest, for food. 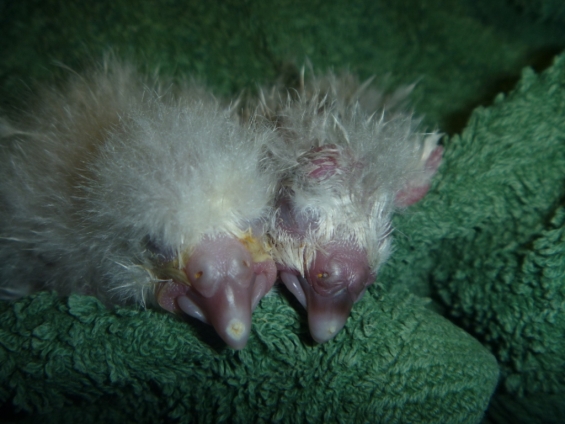 Heather One was discovered by Department of Conservation staff soon after it hatched on Wednesday night. There were concerns about its safety as ex-cyclone Lusi made its way across the Pacific.

“Fortunately, Heather’s nest was in a relatively sheltered spot away from any creek that had the potential to flood. We also checked the site for loose branches and dug extra drainage around the site.”

Meanwhile, on Whenua Hou/Codfish Island, two of the five chicks there have been fostered out to kākāpō mothers who have been sitting on dummy eggs.

The Kākāpō Recovery team would provide intensive monitoring to ensure the chicks were being fed and were healthy. The other three were currently being cared for in incubators and being hand-fed, Ms Vercoe Scott said.