The Department of Conservation holds fears for the safety of New Zealand’s most endangered indigenous breeding bird, the New Zealand fairy tern (tara-iti). Locals and visitors are asked to be mindful of laws protecting these birds.

The Department of Conservation (DOC) holds fears for the safety of New Zealand’s most endangered indigenous breeding bird, the New Zealand fairy tern (tara-iti) and warns locals and visitors to be mindful of laws protecting these birds. 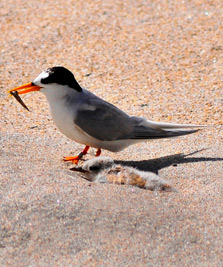 There are only 39 fairy terns, including 12 breeding pairs, remaining and all of them live, and nest, in Wildlife Refuges in Northland (Waipu, Mangawhai, and Pakiri, Papkanui Spit).

“The all-important breeding season has just started and runs until February. This is a particularly vulnerable time for the birds, and with the summer influx of visitors to the area, we are asking locals to remind visitors of the laws, which include no dogs, cats or vehicles on the wildlife refuge and for people to keep their distance from the birds, their nests and their eggs,” says DOC Conservation Services Ranger Vivienne Lepper.

Dedicated DOC Fairy Tern wardens Paulla-Jean Pridham (at Waipu) and Rangi Zimmerman (at Mangawhai) have been fencing nesting sites and preparing nest sites by laying down shell, which the birds like to nest on. The birds then construct nests on exposed, low-lying areas of shell-covered sand. These nests are a simple scrape in the sand, set amidst the shells. Last year 10 fairy tern chicks fledged and a similar success is hoped for this year.

Laws to protect fairy terns and other shorebirds:

How you can help the fairy tern and other shorebirds: