Cause of yellow-eyed penguin disease investigated

Yellow-eyed penguin chicks/hoiho are under the spotlight this week as vets try to find the trigger for the mystery illness that continues to threaten the endangered birds. 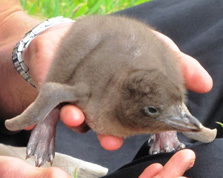 Yellow-eyed penguin chicks/hoiho are under the spotlight this week as vets try to find the trigger for the mystery illness that continues to threaten the endangered birds.

The disease causes ulceration of penguin chicks’ mouths, making it difficult for them to eat and breathe, and can become fatal if left untreated. It is unclear what causes the disease and further research is needed to find ways to manage its impact. 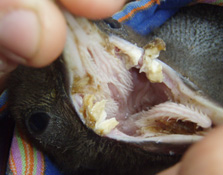 Lesions in a chick with avian diphtheria

It is thought the disease first appeared in hoiho chicks in 1999 and in bad years, it can kill up to 90% of chicks. It is one of several factors preventing the mainland hoiho population from growing.

For the last decade, the Department of Conservation (DOC) has been working with Massey University to try to determine the trigger for the disease. It is assumed that both a virus and bacterial infection are involved with onset of the disease; however, attempts to isolate the former have been unsuccessful.

This week, a team of experts led by vets Kate McInnes (DOC) and Kelly Buckle (Ministry for Primary Industries), as well as staff from DOC, the Yellow-eyed Penguin Trust and Penguin Place are taking samples from hoiho chicks on the Otago Peninsula. Researchers from Otago and Massey Universities, as well as MPI’s Animal Health Laboratory are also involved with the current investigation.

“It’s great we’ve got this coordinated inter-agency effort to investigate the underlying cause,” Kate McInnes said.

“Having the leading experts examining these chicks in the field will give us the best chance of finding the trigger, which could lead to the discovery of a cure – hopefully a vaccine – or better ways of managing the disease, to prevent mass mortality of chicks in the future.”

The team hopes to come up with answers that will help future treatment of hoiho chicks. 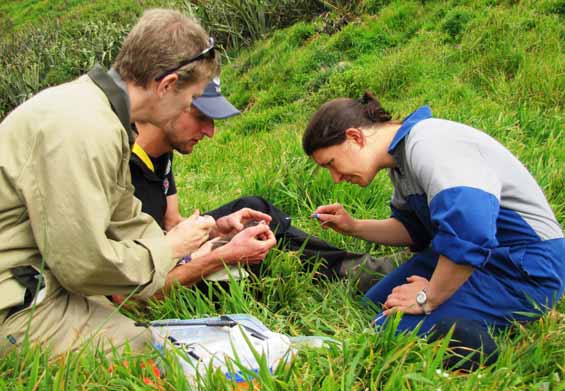