Captive bred whio to be released back into wild

The Battle for our Birds continues with the release of more than 40 captive bred whio back into the wild over the next week.

The Battle for our Birds continues with the release of more than 30 captive bred whio back into the wild over the next week.

The whio is the unique native duck only found in New Zealand's fast flowing waters. Genesis Energy and the Department of Conservation (DOC) have partnered together in a five year programme to secure the future of this threatened native bird.

It's been a record season for whio ducklings bred in captivity with 45 ducklings from three captive sites around New Zealand. Several captive breeding pairs around the country have had multiple clutches this season.

Whio fledglings, three-month-old ducks, are being released at different sites around the Central North Island over the next week.

Today six whio were released in the Tongariro area - four onto Tongariro River and two into Whakapapanui Stream – both locations chosen because of the ongoing predator trapping by local community groups.

Representatives from DOC, Genesis Energy and Tongariro River Rafting were joined by high school students attending the Kiwi Forever week-long programme, students from Hastings Intermediate and a group from the Blue Duck Project Trust for the release. Students took an active role in the tagging of the fledglings prior to the release and also the release onto Tongariro River. 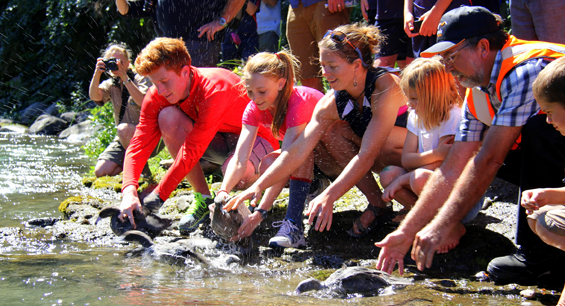 A special ceremony will be held on the banks of the Waiwhakaiho River in Egmont National Park on Thursday to release 16 whio fledglings into the wild.

Once extinct in the Egmont National park, the whio/blue duck is now paddling its way to a population soon to top 100.

These new birds, together with the 25 fledglings from a bumper breeding season within the park, and the 60 adult ducks already paddling the streams, will boost the Egmont National Park whio population to around 101 ducks.

With fewer than 2,500 whio in New Zealand, this Taranaki population is important – particularly as it is the only site in the country where a whio population has been re-established after the original population became extinct. The last official sighting of a whio in Egmont National Park prior to recovery attempts was back in 1948.

The remaining two whio to be released are from the WHIONE project where eggs were taken from nests within Egmont National Park, incubated, hatched and raised in captivity.

Ongoing monitoring and pest control is key to whio survival and population growth within the Egmont National Park. DOC carries out this work with support from the Central North Island Conservation Charitable Blue Duck Trust and East Taranaki Environment Trust.

Next week another 13 whio fledglings will be released on Thursday on the Manganui o te Ao River. This national security site is a strong example of partnership in action and comes under the banner of the ‘Kia Wharite' project. The department, Horizons Regional Council staff, Iwi and landowners continue to work hand in hand to protect this precious population of birds at this security site.

March is Whio Forever month which celebrates the "Whio Forever" project, a New Zealand-wide Genesis Energy/DOC partnership behind a national recovery plan to protect whio/blue duck breeding areas and habitat. The idea is to double the number of fully secure breeding sites throughout the country and boost pest control to enhance productivity and survival.