Spring arrived yesterday in Dunedin with the return of Taiaroa Head’s first northern royal albatross/toroa for the 2014 breeding season.

Spring arrived yesterday in Dunedin with the return of Taiaroa Head’s first northern royal albatross/toroa for the 2014 breeding season. 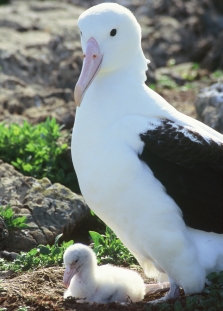 Lyndon identified the first bird to return as a 35-year-old breeding female named white-orange (WO), which is based on the colour band on her leg.

Moments later, the second bird arrived, blue-green-black (BGK), an eight-year-old male who is yet to start breeding.

Lyndon said he was pleased the birds didn’t arrive earlier in the week when Dunedin was hit with snow and hail. “I don’t think we would have fooled anyone into thinking spring was here on Monday.”

Lyndon knows the history of all 200 birds in the colony. He said WO last bred two years ago when her egg kept rolling out of the nest. “This was unusual but then we realised WO and her partner were probably going through a divorce as another female had caught his eye. Last season, this new female bred successfully with WO’s last partner.”

Lyndon is hopeful WO will find another mate soon because, at 35, she’s getting close to the life expectancy of a royal albatross.

“WO will be fine. There are still plenty of bachelors to choose from. But if she does find a mate, they won’t breed until next year at the earliest.”

BGK lives just down the hill from WO’s nest. Mr Perriman said, “Although BGK hasn’t bred yet, he spent much of last summer with another young bird and these two are expected to breed for the first time when egg laying begins in November”.

Now begins the hard work for Lyndon and his team of DOC staff as they closely monitor the birds, return eggs to nests if they rolled out, remove maggots which can kill chicks and provide supplementary feeding when one or both parents don’t return in a timely manner to feed a chick.

January is the most intense period for both birds and staff, with heat stress and fly strike threatening vulnerable newly hatched chicks. 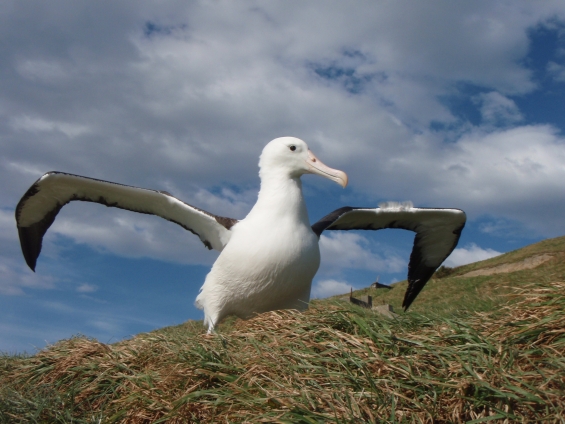 Lyndon is hoping this year will produce a bumper crop of chicks like last year when 24 chicks were raised, 20 of which have fledged over the last few weeks. The last four should depart in the next week or two.

The manager of operations at Taiaroa Head, Hoani Langsbury, welcomed the first albatross, saying he expected this breeding season to be even more successful than last year, which was the second best season ever for the colony.

Dunedin traditionally marks the arrival of the first albatross by ringing church bells. The bells of First Church tolled around the city at lunchtime today to welcome the albatross back for the 2014 season. The church at Otakou Marae on Otago Peninsula also rang bells.

The area is a protected reserve where Doc staff closely monitor the lives of the massive seabirds. They are the largest seabirds in the world with a wingspan of more than 3 metres.