Ask students in Dunedin how you snorkel a dune lake in the Far North without leaving home and they will tell you – 'LEARNZ of course!'

What started as a way to link NZ school children with field work in Antarctica back in 1996, has now evolved into a chance for schools to take part in virtual field trips across the country via live audio link ups and an interactive website with video, a web board and 'ask an expert' posts.

In its fourth year, the Far North field trip focused on World Wetlands Day with a strong Tikanga Maori and Te Reo component. 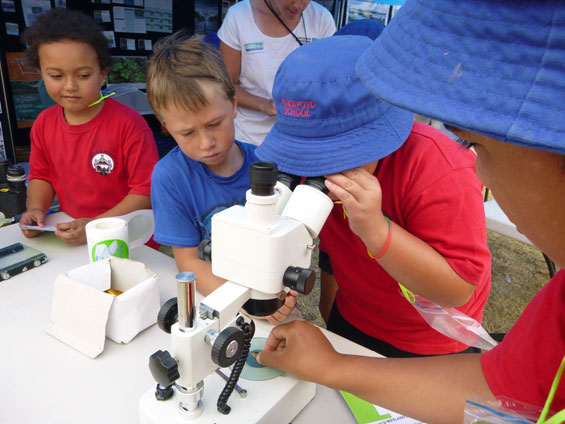 Students checking out a fish

LEARNZ frontman, Andrew Penny, said that the Far North trip, which was sponsored by the Department of Conservation, was unique from that perspective.

"It set the scene for others in regards to involving Iwi. It also offered students the chance to go to places and engage with everyday people, events and experiences that they may not otherwise get the chance to do," said Andrew.

This year the Far North field trip was held at Lake Ngatu. Schools from as far away as Dunedin joined in via LEARNZ, while around 160 students from nine Far North schools, and homeschoolers actively participated in activities including a guided walk. Students investigated what species live in the lake, and explored traditional uses for natural resources found around the lake.

Questions and responses from students

'Are there starfish in the lake?' was one of the questions Northland Regional Council's wetlands adviser, Lisa Forrester, was asked by a virtual field trip participant. The question is an interesting one for Lisa, because although she isn't aware of starfish living there, she knows there are marine species that have freshwater equivalents.

"There are species of jellyfish and crabs that live in wetlands, so the starfish question really has me thinking," said Lisa.

Ahipara School student, Ruapounamu, gave the most common response from students when asked for their highlight of the day; "My favourite was snorkelling because it was cool to see all the fish and the species that live in the lake."

Comments from organisers and educators

DOC Kaitaia's Community Relations Ranger and key organiser, Denice Gilliespie, believes that the event showed the lake in a completely different light for the students.

"They see how important it is to look after it so it sustains us all now and forever, recreationally and culturally," said Denice.

Experiencing Marine Reserves (EMR) coordinator, Camellia Nielsen, whose team ran the snorkelling, said her goal was to help the children to appreciate their role as kaitiaki (guardians) of the wetland.

"So many of the children have been here before but they have never snorkelled in the lake. They were quite taken aback by all the dead bullies (a native fish) they saw, as their fins had been eaten by mosquito fish (gambusia-a pest fish)," said Camellia. 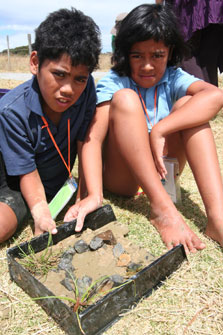 Children with their wetland creation

NRC's Environmental Educator, Julie Holt, had the children create miniature wetlands that they then tested to see how the wetlands react to torrential rain. Julie said the activity showed the children how a wetland functions.

"It's a hands-on demonstration of the value of wetlands as flood protection," said Julie.

She said that when quizzed about what they had discovered, Paparore School students talked about wetlands as also being places for holding water and providing habitat for native animals.

Lake Ngatu sits within the rohe of Ngai Takoto. Part of Ngai Takoto's whakatauki (proverb) talks about the pioke (dog shark) being small in stature but still able to swim against the strong currents around it. For Te Runanga O Ngai Takoto's Environmental Manager, Kaio Hooper, this is an important reminder in his role and commitment to ensuring that the lake is protected and cared for, despite increasing environmental pressures on the lake's wellbeing.

Although still ranked as outstanding, environmental monitoring indicates a decline in Lake Ngatu's water quality, and an increase in pest species. Kaio said this is a case for concern for Ngai Takoto, as the Kaitaiki of the lake.

"For our people it's not so much about scientific reports. They rely more on what they see, and they are noticing that the water is not as clear as it once was," said Kaio.

Kaio said Ngai Takoto is looking at ways they can address their concerns. To start the conversation, Kaio set up an information stall where people were asked to complete a simple survey that focussed on understanding people's aspirations and concerns for the lake's health.

"We've been watching the lake change over the past couple of years and it's not good. We want to work alongside interested parties on a management plan, and the survey is a good starting point," said Kaio.

Karikari Peninsula's Kura Kaupapa O Rangiawhia was the first to sign up for World Wetlands Day. They have been involved in the Far North LEARNZ trips from the beginning, contributing to the video footage and live Te Reo audio feeds. Teacher, Jo, who leads the school's involvement in LEARNZ, said the children love the chance to have out of classroom learning opportunities.

This year is the first time that the classroom materials have also been available in Te Reo.

"It's given the children awesome resources and new vocabulary," said Jo.

World Wetlands Day is an annual event to promote the value and vulnerability of wetlands across the globe promoted by RAMSAR, an international agreement to protect wetlands.