A single pilot whale, found stranded on a small beach close to the start of the Rakiura Great Walk on Stewart Island / Rakiura on Wednesday, has been euthanised.

A single pilot whale, found stranded on a small beach close to the start of the Rakiura Great Walk on Stewart Island / Rakiura on Wednesday, has been euthanised.

The 3.5 m whale was discovered near the bridge at Little River by a ranger carrying out maintenance on the popular walking track.

Department of Conservation (DOC) ranger, Phil Brooks, says that the tide had just started to recede when he came across the whale.

“It was beached, close to the high tide mark,” says Mr Brooks. “It would appear that it came in on the previous high tide as it was still alive, but it was quite clearly in a distressed state.”

Other DOC staff were immediately called to the area to assess the situation.

“Advice was received from our marine mammal experts,” says Programme Manager Sharon Pasco, “but refloating the whale was not considered a viable option, due to poor weather conditions and the length of time before the next high tide.”

“Unfortunately, to prevent prolonged suffering, we had to make the decision to euthanise the whale,” says Mrs Pasco.

DOC staff carried out a search of the coastal area surrounding Little River by boat to ensure that no further whales were in danger of stranding, but all beaches were clear and no further animals were sighted in the water.

Boat operators are urged to watch for whales and to immediately report any sightings to their nearest DOC office.

The whale will be left to decompose naturally on the beach, due to the remoteness of the site. 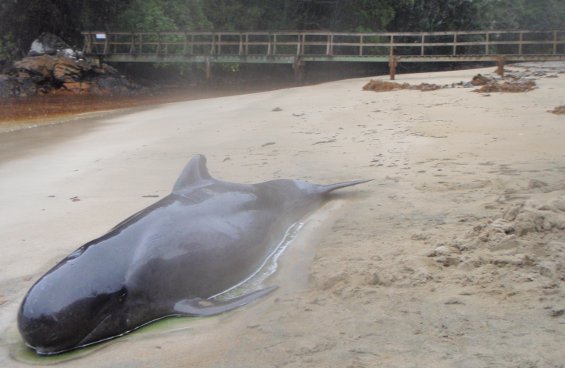 Pilot whale stranded close to the start of the Rakiura Track with the Little River Bridge in the background. High resolution copy of this photograph is available on request.

Fifty one species of marine mammal have been recorded in New Zealand waters (9 seals, 42 whale, dolphin or porpoise), this equates to approximately 60% of the species currently known to science on a worldwide basis. New Zealand is often referred to as the marine mammal capital of the world for this reason.

Under the Marine Mammals Protection Act 1978 it is illegal to possess, kill, injure, catch, or disturb any marine mammal or any part of a marine mammal without a permit to do so. ‘Taking’ of marine mammals or parts thereof (alive or dead) without proper authorisation could incur a penalty of up to 6 months imprisonment or a fine up to $250 000.

How you can help at a stranding:

The largest mass stranding on record occurred in 1918 where about 1000 whales stranded on the Chatham Islands.

The most recent pilot whale stranding on Stewart Island / Rakiura occurred in February 2011 when 107 whales stranded on Mason Bay Beach.