Six whio raised in captivity were released on 21 March 2013 in the Tongariro area to supplement the wild populations.

Six whio raised in captivity were released on 21 March 2013 in the Tongariro area to supplement the wild populations. The release was part of Whio Awareness month.

The whio captive breeding programme is comprised of birds from rivers around the central North Island. This year was a record season for ducklings produced in captivity, with 26 ducklings successfully reared. Up until now, young whio bred in captivity have been used to re-establish a population on Mt Taranaki. Now with a thriving population on Mt Taranaki, some of the captive bred whio will be released back into the area where their parents came from.

Four birds were released onto the Tongariro River and two onto the Whakapapanui Stream. These locations were chosen because of the ongoing predator trapping by local community groups, which will greatly improve their survival. On the Tongariro River, the Blue Duck Project Charitable Trust has been successfully trapping since 2008. At Whakapapa students from Ohakune and National Park primary schools have built traps which are maintained by the Whakapapa Community Club and staff from the Whakapapa Holiday park, Skotel and Chateau Tongariro.

The enviro students from Broadlands School attended the release. They had been studying the Fantastic Whio programme as part of the Taupo for Tomorrow Programme with educator Mike Nicholson. Head boy Stephen Hinton and head girl Charlotte Harris were chosen to release two of the whio, a life-time opportunity for these young conservationists’.

Genesis Energy and the Department of Conservation have partnered together in a five year programme to secure the future of this threatened native bird. Operating under the name of Whio Forever this partnership is implementing a national recovery plan to protect whio breeding areas and habitat. 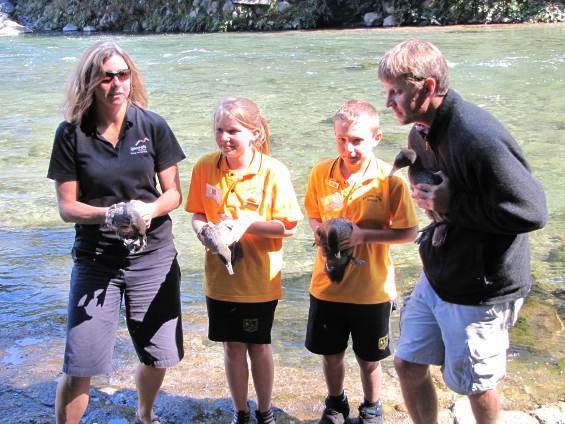