In 2006 a group of like-minded locals got together to initiate the Old Ghost Road Cycleway project.

In 2006 the idea of opening up the 1880s old Dray County Road between the Lyell and Seddonville settlements was initiated by the Mokihinui Lyell Backcountry Trust (MLBT), a group of like-minded locals that had a love for this unique area.

Since that time the Trust has been working closely with the Department of Conservation to ensure that the historic, cultural and natural environment of this special area would be preserved, and by creating a world class dual purpose tramping/cycleway would allow more visitors to appreciate the natural wonders that the northern Buller has to offer.

In 2010 the potential of this cycleway was recognised with MLBT receiving sponsorship money through the National Cycleway initiative. Working closely with DOC and in consultation with others dedicated to preserving and sharing the country's wild places the final plan was detailed and work began.

The first phase of the 80 km cycleway was officially opened on Saturday 2 February 2013 with a heli-bike/hike opportunity from the Lyell Conservation Campsite in the Upper Buller Gorge where 84 bikers and hikers were flown to the Mount Montgomery Range and then rode/walked the 25 km back to the campsite.

On Sunday 3 February a more official opening ceremony was held at the NBS Theatre in Westport with approximately 150 people attending. 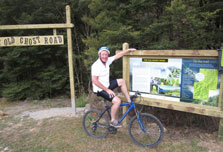 Our own Minister of Conservation Dr Nick Smith spoke at the Sunday ceremony, after completing part of the trail on his way to Westport.  The Minister was very enthusiastic about the Old Ghost Road Cycleway and stated his commitment to see the project through to a successful conclusion.

Phil Rossiter, chairperson for MLBT commented that "the opening weekend provided a valuable insight into what we have always believed, that The Old Ghost Road truly holds something special for those that venture along it. Feedback, both from formal user surveys and informal sources was overwhelmingly positive and seriously humbling.  It validated that The Old Ghost Road is on track to positively transform the outdoor recreation landscape of the northern West Coast and add to New Zealand's emergence as an international cycling destination. We are very excited and focussed on continuing progress and adding further sections to the public offering."

Riding part of the OGR cycleway

MLBT are presently completing the Seddonville end of the trail through to Limestone Creek with this section expected to be opened by April this year. Once completed DOC will take over the maintenance of both trail ends, and are working closely with the Trust to complete the middle 35% section of the trail.

MLBT have built four huts on the trail at Lyell Saddle, Ghost Lake, Stern Valley and Specimen Point. The Lyell Saddle Hut is now open to the public and can be booked online by visiting the Old Ghost Road website.

Along with huts, a number of bridges have been constructed crossing over major rivers and making traversing an area known as "Suicide Bluff" safer for both trampers and cyclists.

By opening up this trail, it will enable many New Zealanders to participate and live their heritage in what was once a remote environment suitable to a few hardy souls, and sits nicely with the Department's national objective of: "our history is protected and brought to life" and "New Zealanders gain environmental, social and economic benefits from healthy functioning ecosystems, recreation opportunities and living our history".