Zoo visitors will soon be able to see and learn more about one of the world's rarest birds.

Zoo visitors will soon be able to see and learn more about one of the world's rarest birds. 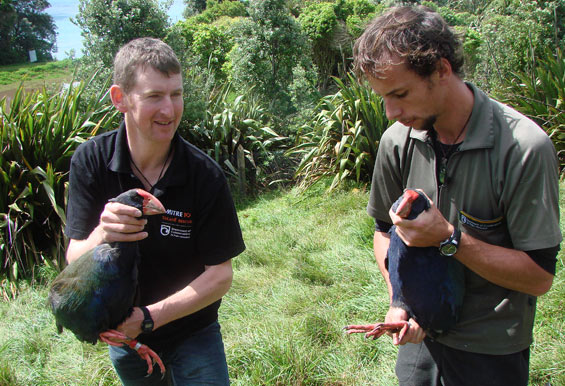 Takahē are critically endangered, with 260 takahē known to exist and only 45 breeding pairs.

The pair of takahē coming to Auckland have been an integral part of the DOC's Takahē Recovery Programme, having produced seven chicks in nine years. Now beyond breeding age, the pair - named Ahikaea (14) and Montague (16) - will have an important advocacy role at the zoo.

"This is the first time that Aucklanders will be able to see a bird that, from 1900 until 1948, was thought to be extinct," says Department of Conservation Takahē Recovery Programme spokesperson, Phil Marsh. "There are other birds in mainland sanctuaries, but we believe that enabling Auckland Zoo's visitors to see these unusual and endangered birds will help raise awareness of their plight and help DOC's Mitre 10 Takahē Rescue programme to ensure the species survives."

"The takahē is so rare they often slip under the radar," says Mitre 10 General Manager Marketing Dave Elliott. "Thats why their introduction to Auckland Zoo is a great step in ensuring this unique bird remains an iconic part of New Zealand for years to come. Having them right on the doorstep of the country's largest population is really special and we feel incredibly privileged to be involved." Auckland Zoo director, Jonathan Wilcken says the pair's arrival is yet another example of what can be achieved when organisations come together to help build a future for wildlife. "Takahē are a unique part of New Zealands history and a very valuable addition to Auckland Zoo. Once they settle in, we can't wait for our visitors to come and see these critically endangered birds and encourage the ongoing protection of our unique species." Ahikaea (14) and Montague (16) are being moved by helicopter from pest free Tiritiri Matangi Island, in Auckland's Hauraki Gulf, to Auckland Zoo on Thursday 26 September.

There were only four recorded sightings of takahē between 1800 and 1900, then none were seen until 1948 when they were rediscovered by Dr Geoffrey Orbell in the Murchison Mountains in the Fiordland National Park.

Saving takahē has involved gathering excess eggs from the Murchison Mountains and hatching them at the Burwood Bush Takahē Rearing Unit near Te Anau. Chicks reared at the unit have been released onto pest free islands - Kapiti, Mana Maud, Motutapu and Tiritiri Matangi - safe from predators, particularly stoats. This has led to an increase in takahē numbers.

Ahikaea was born on Tititiri Matangi and is the daughter of Greg and Pounamu who were among the first takahē released on the island. Greg was removed as an egg from the Murchison Mountains and reared at the Burwood Bush unit before moving to Tiritiri. He became famous while living on Tiritiri for numerous antics including regularly stealing visitor's lunches.

Montague was transferred to Tiritiri Matangi from Kapiti. His parents, Squeak and Taku were among the founding takahē population on Kapiti.

Pest free islands have been a life raft for takahē. They've provided safe havens to increase takahē numbers. Moving the birds to different islands for breeding means the offspring are more genetically robust.