A week of events (from 21 to 26 January) was organised by the Chatham Island Tāiko Trust, with support by the Department of Conservation (DOC), to celebrate the rediscovery of the endemic petrel thought to be extinct for nearly a century. 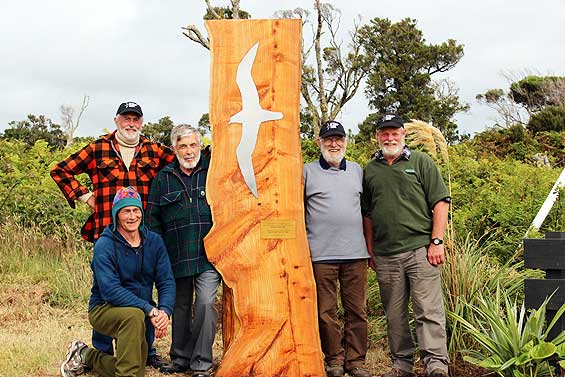 Chatham Island Tāiko Trust Chairperson, Liz Tuanui, was thrilled with the turnout for the celebrations.

“The tāiko is one of New Zealand’s most endangered species with fewer than 200 birds remaining. However, its future is looking up thanks to local support for the work of the Trust and DOC. Interest in these events is a demonstration of that support,” said Tuanui.

More than 150 people attended the final event—the unveiling of the Tāiko Totem—an acknowledgement of all the people who have contributed to the Tāiko project.

Among the guests of honour, recognised with presentations at the celebration, were David Crockett and several members of the original team who rediscovered the Chatham Island tāiko (Pterodroma magentae) on 1 January 1978.

The contributions of many local identities and landowners who supported the original team and subsequent protection work were also acknowledged. In particular the contribution of the Tuanui family who gifted 1200 ha of bush to the Crown in order to establish Tuku Nature Reserve where the majority of known tāiko burrows are found.

The weather throughout the week was fine and settled, and all the events came together in a fitting tribute topped by a very rare opportunity to actually view a tāiko.

The majority of known burrows are located in the Tuku Nature Reserve, 1200 ha of bush along the Tuku River which was gifted by Manuel and Evelyn Tuanui to the Crown for the protection of tāiko.

The Department of Conservation carries out predator trapping programmes in the Tuku Reserve for the protection of tāiko and also monitors breeding burrows.

Tāiko were historically found in large numbers on the Chatham Islands but the arrival of cats, pigs and rats with the sealers and whalers in the late 1700s and early 1800s caused the population to decline dramatically and it was virtually unknown 100 years later.

A petrel of unknown origin was collected by a sailing ship in 1867 in the South Pacific Ocean, south of the Tubuai Islands and held in the Turin Museum.  The capture of the tāiko in 1978 was able to confirm that that specimen was the same species as the birds breeding in burrows on the Chatham Islands.