The rare find of a Risso’s dolphin – the same species as legendary dolphin Pelorus Jack – has been made on the remote north-west Nelson coast.

The rare find of a Risso’s dolphin – the same species as legendary dolphin Pelorus Jack – has been made on the remote north-west Nelson coast.

Two parties of trampers heading to and from Kahurangi Point went to the rescue of the dolphin when they found it stranded on the beach but alive near Big River on Sunday June 23. The five trampers kept it wet and moved it to a nearby stream which had sufficient water depth to keep it moist and where they hoped it might refloat in the incoming tide and swim out to sea.

The dolphin was still alive when the trampers left it but was dead on Monday when Department of Conservation ranger Mike Ogle went to inspect it after DOC was alerted to it.

Although Mike has encountered many different species of whales and dolphins stranded in Golden Bay area, this was a species he hadn’t seen before.  Mike identified it as a Risso’s dolphin after checking its distinctive features against those in a reference book.

“I was surprised to discover it was a Risso’s dolphin, and it was an exciting find, being a species uncommonly seen in New Zealand.’ 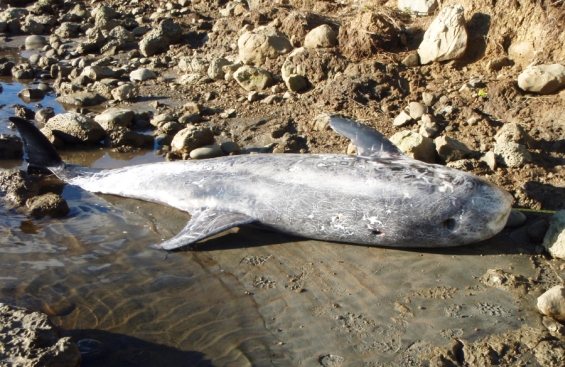 It is the same species as Pelorus Jack, the dolphin that became famous more than 100 years ago for accompanying ships in the Cook Strait area. He was named for meeting vessels bound for Nelson at Pelorus Sound in the Marlborough Sounds and escorting them as far as the entrance to the treacherous waters of French Pass. He did this for 24 years between 1888 and 1912 and was the first dolphin in the world to be protected by law.

Only 17 Risso’s dolphins are recorded to have been found stranded on the New Zealand coast since1846. Risso’s dolphins occur worldwide but New Zealand is on the far edge of their range in the Pacific Ocean area where there is estimated to be around 2000 of the dolphins.

Mike said the 2.98 metre-long male Risso’s dolphin found on the north-west Nelson coast showed signs of old age and this may have contributed to its stranding and death.