Seventy-four endangered brown teal/pāteke were released into the Arthur Valley on the Milford Track on Thursday 21 February 2013 as a result of a new Great Walk conservation initiative between the Department of Conservation and Air New Zealand.

Seventy-four endangered brown teal/pāteke were released into the Arthur Valley on the Milford Track on Thursday 21 February 2013 as a result of a new Great Walk conservation initiative between the Department of Conservation and Air New Zealand.

The pāteke release is part of the wider Air New Zealand Great Walks Biodiversity Project – a $1 million dollar conservation initiative that aims to restore bird life and habitats along DOC's Great Walks, including the Milford Track. 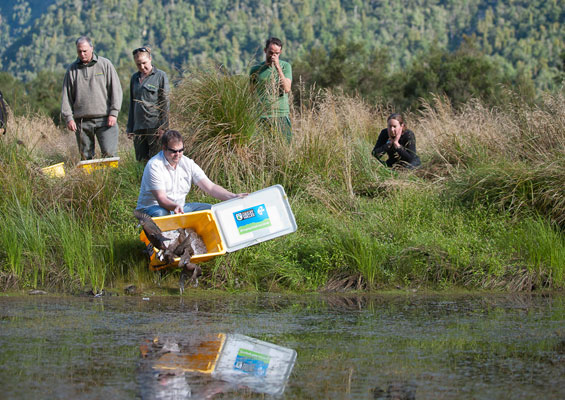 The density of stoat traps along the track has been doubled over the past few months and possum and rat control is being established in part of the Clinton Valley.

The more intensive predator control will protect vulnerable species, such as kiwi, that still exist in the area, and allow other threatened species, such as pāteke and takahē to be returned to the area.

DOC Te Anau's area manager Reg Kemper says the partnership will mean that New Zealand and international visitors will be able to walk among some of the world's rarest birds on one of the world's best tracks.

'The pāteke are the first vulnerable species to be returned as part of this partnership. Next year, we're hoping to release takahē to the Milford Track – this will be the first time in living memory takahē have been back in the Clinton Valley."

"To be able to encounter one of the world's rarest birds in its natural environment will only underline the international reputation of the Milford Track."

The pāteke released on the Milford Track last week are part of a six-year project to re-establish a pāteke population in the South Island. Pāteke were present in the Arthur Valley until the 1990s, but were lost from the area due to predation by introduced predators, particularly stoats. The first release of pāteke into the Arthur Valley occurred in 2009.

Pāteke are the rarest waterfowl on the New Zealand mainland. Re-establishing a pāteke population on the Milford track is an important step to secure the species nationally.

The $1 million project has grown out of the partnership signed earlier this year between DOC and Air New Zealand, which aims to reinvigorate and promote New Zealand's internationally renowned Great Walk tracks.

The first work on this ambitious project has already started with DOC and Air New Zealand staff teaming up at four Great Walk sites to begin the environmental management and predator control needed to bring the birds back.

This work will eventually pave the way to put takahē back into the Milford Track,  saddleback/tīeke and kōkako back around the Lake Waikaremoana Great Walk, whio in the Routeburn Valley and restore populations of kiwi and robins on the Stewart Island/Rakiura Track.

The initiative builds on the reputation of our Great Walks as a must-do tourist experience – it's a great example of the environmental and economic return from investing in conservation.

DOC has been controlling stoats along the Milford Track and surrounding valleys since 1999 to protect blue duck/whio. The Air NZ Great Walks Biodiversity Project will allow the protection of more vulnerable native species, such as kākā, kiwi, kākāriki and robins, by increasing the density of stoat traps and extending the predator control to include rats and possums.

The more intensive predator control will allow the reintroduction of threatened bird species that can't exist in areas where predators are uncontrolled. This has already begun with the release of pateke (brown teal) into the Arthur Valley and will be followed by re-introducing mohua and takahe to the area in 2014.

The pāteke were once widespread throughout New Zealand but are now rare and restricted to Great Barrier Island, coastal valleys of eastern Northland, and several other locations

There are currently estimated to be between 2,000 and 2,500 pāteke living in a wild state in New Zealand, making it New Zealand's rarest waterfowl species on the mainland.