A rare beaked whale has washed up on a remote Westland beach—the third specimen of this whale type to be found on this coastline in the last two years.

A rare beaked whale has washed up on a remote Westland beach—the third specimen of this whale type to be found on this coastline in the last two years.

Yesterday DOC staff responded to an alert that the marine mammal was stranded on the beach at Bruce Bay, about 200 km south of Hokitika, and rangers were on site within hours to try to rescue it. Unfortunately, the whale died before they arrived at the scene.

“We had hoped that we might have been able to refloat the whale and get it back out to sea, but unfortunately not this time.”

The whale has been identified as a Cuvier’s beaked whale—one of the more common beaked whale species worldwide. Tissue samples will also be sent to a laboratory for analysis to get a firm identification.

Te Rūnanga o Makaawhio chairman, Paul Madgwick, said whale strandings had always been of deep significance to Ngāi Tahu, from the tribe's creation and migration stories to the practical uses of whales as a source of food and bones for tools and weapons.

Whales were often regarded as kaitiaki (guardians of the sea) and strandings were interpreted as signs.

"It is especially significant for Ngāti Mahaki ki Makaawhio that this whale was stranded only a short distance from our old pā site. We will be working closely with DOC to ensure that the carcase is treated with respect," he said. 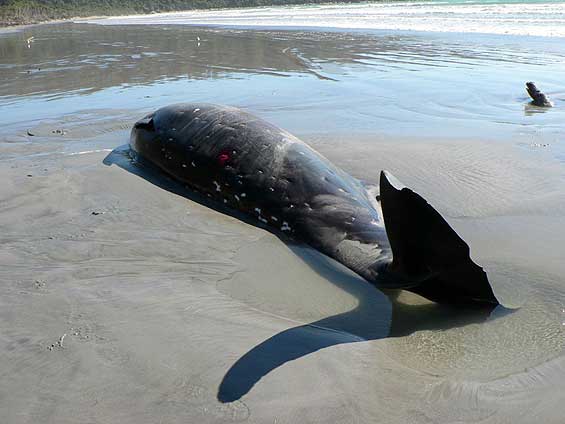