Pateke thrive on the Coromandel Peninsula

DOC's annual population checks continue to show an increase in numbers and dispersal of pateke (brown teal) on the Coromandel Peninsula.

Since the initial translocation in 2003 of captive bred birds from around the country, the population has increased significantly with birds being found in new locations every year. 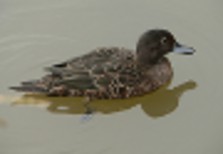 'Although the world's 4th rarest dabbling duck is doing well, as the ducks move south predator control is the key to the birds being able to raise ducklings to maturity.' Christine Friis DOC biodiversity ranger commented.

'Community groups like Moehau Environment Group (MEG) have been instrumental with predator control helping the pateke numbers get off the ground.'

'Protecting pateke is as easy as having domestic cats wear a bell and being kept inside overnight. Domestic cats target pateke who hide rather then fly away when frightened,' says ranger Christine.

''Duck shooters can help by making sure pateke are identified and not shot during the upcoming game bird season.'

DOC is particularly interested in reports of new pateke populations as the ducks disperse down the Peninsula.