A new pest control initiative known as the 'Noose and Necklace' is underway in the eastern Bay of Islands to help protect the Cape Brett Peninsula and Project Island Song.

A new pest control initiative is underway in the eastern Bay of Islands to help protect the Cape Brett Peninsula and Project Island Song. Known as the 'Noose and Necklace', two parallel trap/bait station lines between Parekura Bay and the eastern open coast are designed to reduce the numbers of rats, stoats, possums, hedgehogs and cats moving northwards onto the pest-controlled Cape Brett Peninsula.

"Establishing the line's been a real community effort. It's jobs like this that really bring people together," says John Booth, pest-control coordinator for the Eastern Bay of Islands Preservation Society. "Animal pest control is a topic of keen concern for the eastern Bay of Islands, where several individual projects and the efforts of local landowners are already reducing densities." All these projects, however, are constantly compromised by the ongoing immigration of pests from the south (including the Ngaiotonga and Russell forests).

"By placing two 'necklaces' (some prefer calling them 'nooses') at the base of the Cape Brett Peninsula, we are making both a symbolic - as well as practical - contribution to the reduction of pests establishing on the peninsula and out as far as the islands of the eastern Bay."

Fleur Corbett, Chair, Guardians of the Bay of Islands, says, "An initiative such as the 'Noose and Necklace' has the potential to really help protect our pest-free eastern islands. It provides a low-pest buffer zone adjacent to the islands of Project Island Song.

The Project is already benefitting from mainland pest control with the Guardians' first translocation of native birds - brown teal/pateke resulting in a very recent hatching of five pateke ducklings on Urupukapuka Island. Other translocations are literally in the wings, with North Island robin/toutouwai hopefully being reintroduced to Moturua Island this autumn."

According to John, the first line runs near the Whangamumu Track, while the other to the south is over private land. A third line is yet to be established along the roadsides from Parekura Bay to Elliott's Beach. The traps are specifically for stoats, cats, and hedgehogs; the bait stations help to deal with possums and rats.

John says, "The on-going quest for possum fur in the area helps, but by itself this just doesn't do the job in terms of the level of pest control needed."

The 'Noose and Necklace' was proposed by John Booth; designed by Greg Blunden of the New Zealand Kiwi Foundation and the local landowners; and set up by Rawhiti's John Clendon using gear provided by the Northland Regional Council, supported by the DOC BioAdvice Fund. 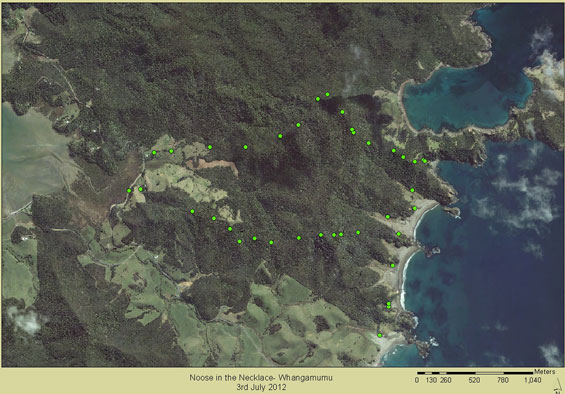