The fifth season of wilding pine control on Mt Tarawera began earlier this month with a karakia at the top of the mountain and some words of inspiration and challenge from kaumatua and other supporters.

The project employs a team of five young Ngati Rangitihi men to live and work on the mountain for several months each summer. It aims to protect the high ecological, landscape and cultural values on the mountain, all of which are under serious threat if trees are left to continue spreading across the mountain’s open landscape.

Supporting the opening event were Ngati Rangitihi trustees, along with staff from the Department of Conservation (DOC), Bay of Plenty Regional Council (BOPRC), and other organisations involved with the project including Helipro.

Ken Raureti, Chairman of the Ruawahia 2B Trust, praised the team for their commitment, in particular the two Ngati Rangitihi men who had been working on the project for several seasons. Michael Playle (Tai) has been there since the project began in 2009 and is now the team leader, and Wiremu Redmond is in his third season.

Mr Raureti has seen the young men grow and develop and is proud of their achievements. "It is their maunga they are looking after." he said. "Their mana has been enhanced not only within themselves, but also within the community of Matata where they come from." 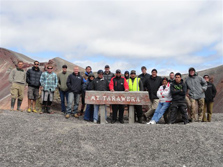 Karakia at the top of Mount Tarawera to begin the work.

Over the last four summers, the crew have cleared about 700 hectares of wilding trees on the southern flanks and all of the domes of Mt Tarawera. The trees are mainly lodgepole pine (Pinus contorta), radiata pine and douglas fir.

The majority of trees have been felled using chainsaws and seedlings hand-pulled by the crew.

The plan this year is to clear a further 100 hectares along the northern slopes of Wahanga, which can be easily seen from Lake Tarawera.

DOC ranger Paul Cashmore manages the day to day running of the project and explains why it is so important to keep on top of the wilding pine problem on the mountain. "If it is not controlled, they will continue to spread and grow at a rapid rate across the open tops eventually forming a complete closed canopy of pine forest," he said. "It would completely change the Mt Tarawera landscape that we all know so well."

Wilding pine trees high on the mountain would provide a seed source for spreading into other areas in the Bay of Plenty, as the light seed can travel a long distance in the wind given the location and height of the mountain. "This project will not only play an important part in protecting the values of Mt Tarawera for future generations," says Mr Cashmore, "but also help to reduce the spread of lodgepole pine in particular across the Bay of Plenty."

The Ruawahia Wilding Conifer Control Programme is a partnership between Ruawahia 2B Trust which administers Mt Tarawera on behalf of Ngati Rangitihi, DOC, and the Bay of Plenty Regional Council. The project has also received financial support from the Biodiversity Condition Fund, which recognises the importance of this work.

The fifth season of wilding conifer control is expected to carry through until Feburary 2014.