Flowering Dactylanthus taylorii has been rediscovered on the Coromandel Peninsula

A small team of DOC rangers from across the Waikato spent two days in search of the elusive Dactylanthus taylorii or wood rose. Much excitement followed the discovery of a flowering individual during the grid search.

A small team of Department of Conservation (DOC) rangers from across the Waikato spent two days in search of the elusive Dactylanthus taylorii or wood rose. Much excitement followed the discovery, (made by John Brown of the Waikato Area Office), of a flowering individual during the grid search. 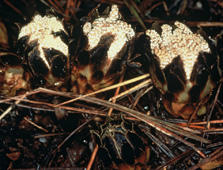 "It's a very exciting find as there is a possibility of more undiscovered individuals in the area," says biodiversity ranger Kevin Carter. "The team spent the two days in the bush fighting through thick scrub looking for the elusive plant," added Kevin.

Dactylanthus is chronically threatened and listed as "nationally vulnerable". The plant is unique as it is New Zealand's only totally parasitic flowering plant. It lives on the roots of native hardwood trees including mahoe, lancewood and fivefinger. The main plant lives under the soil but a rounded bulge can be seen at the soil surface. This bulge is dark brown and covered with hard circular warty protrusions. The flowers are densely crowded, about two to four centimetres in diameter and can be seen between January and May.

In 2002 a small patch of Dactylanthus was rediscovered on the Peninsula, after over 100 years of no confirmed sightings. These were caged to protect the plants from damage due to browsing animals, especially possums. Unfortunately, it now appears that these plants have died naturally due to the death of their host tree.

The new plant will be caged and monitored during flowering season. The other major threat is from human disturbance. Further searches are planned to find and protect any plants that may be in the area.

You can help protect this threatened species by reporting any sightings to the Department and by controlling pests on your property.