Seventeen critically endangered native parakeets have been transported from the South Island to predator free Tūhua / Mayor Island, in the Bay of Plenty, to keep them safe from a predicted plague of predators in the beech forests where these rare native birds live.

Seventeen critically endangered native parakeets have been transported from the South Island to predator free Tūhua / Mayor Island, in the Bay of Plenty, to keep them safe from a predicted plague of predators in the beech forests where these rare native birds live. 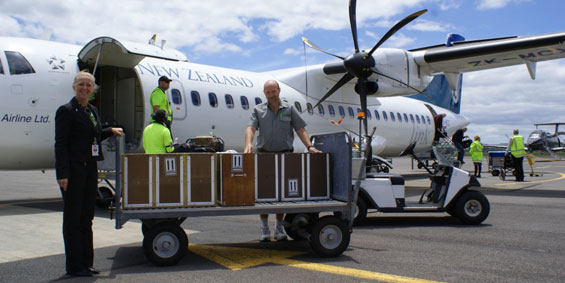 The orange-fronted parakeets/kākāriki karaka were once common throughout New Zealand but have been brought to the brink of extinction by introduced predators - particularly stoats and rats.

It's estimated there are only around 200 kākāriki karaka left in three areas of alpine forest in the South Island. These last remaining natural populations are in the Hawdon and Poulter valleys in Arthur's Pass National Park and the south branch of the Hurunui valley in Lake Sumner Forest Park in North Canterbury.

"We're worried that beech trees are producing a huge number of seeds, known as a beech mast. This provides vast amounts of food for rats and their numbers could explode which would spark a surge in stoat numbers," says DOC ranger John Heaphy, a member of the Orange-Fronted Parakeet Recovery Group.

"A plague of these predators would be bad news for orange-fronted parakeets. This is why we're moving these critically endangered native birds from the South Island to predator-free Tūhua Island in the Bay of Plenty."

DOC worked with the Tūhua Trust Board to remove rats and other predators from Tūhua, the ancestral home of Te Whānau A Tauwhao ki Tūhua. The island was declared predator free in 2002.

"We're working with Te Whānau A Tauwhao ki Tūhua and other partners to build a self-sustaining population of orange-fronted parakeets on this safe haven," says John Heaphy.

DOC is also working with the Isaac Conservation and Wildlife Trust who are successfully breeding orange-fronted parakeets at their Peacock Springs conservation park in Christchurch.

"The 17 orange-fronted parakeets released on Tūhua were all bred at Peacock Springs. This breeding programme is an essential part of the work to secure the survival of this budgerigar-sized native parakeet," says John Heaphy.

A captive population of birds at Peacock Springs produces eggs for a re-location programme. Orange-fronted parakeets hatched and reared at the park have been released on three other predator free islands - Chalky Island in Fiordland and Blumine and Maud islands in the Marlborough Sounds - as well as Tūhua 30 km off Tauranga.

The orange-fronted parakeets released on Tūhua were hatched and raised by the Isaac Conservation and Wildlife Trust at Peacock Springs. They were flown from Christchurch to Rotorua by Air New Zealand as part of the airline's partnership with DOC, which includes the relocation of native species throughout the domestic network.

Fauna Recovery New Zealand provided the helicopter that flew the birds from Rotorua Airport to Tūhua. And Te Whānau A Tauwhao ki Tūhua received the birds on Tūhua and are their guardians in the island. The birds were moved from Christchurch to Tūhua/ Mayor Island on Wednesday this week (December 18).