The fortunes of rare whio/blue ducks in Kahurangi National Park’s Wangapeka-Fyfe area have been boosted by the arrival of eight young ducks last week.

The fortunes of rare whio/blue ducks in Kahurangi National Park’s Wangapeka-Fyfe area have been boosted by the arrival of eight young ducks last week.

The eight whio, aged around three to four months, had been taken as eggs from wild pairs in the park. They were hatched and reared at Christchurch’s Peacock Springs Wildlife Centre in a WHIONE – Whio Operation Nest Egg – programme aimed at building the native duck’s numbers.

Funding from Genesis Energy assisted the WHIONE programme in the Wangapeka-Fyfe Whio Security Site as part of a Whio Forever partnership with the Department of Conservation aimed at securing the future of what is one of New Zealand’s most threatened species.  The security site, centred on the Wangapeka and Fyfe river catchments and encompassing around 30,000 hectares of beech forest, is one of eight nationally assisting the survival of whio in the wild.

DOC Motueka Area Manager Martin Rodd said the eight young ducks were a welcome addition to the Wangapeka-Fyfe whio site where it is aimed to establish 50 pairs. 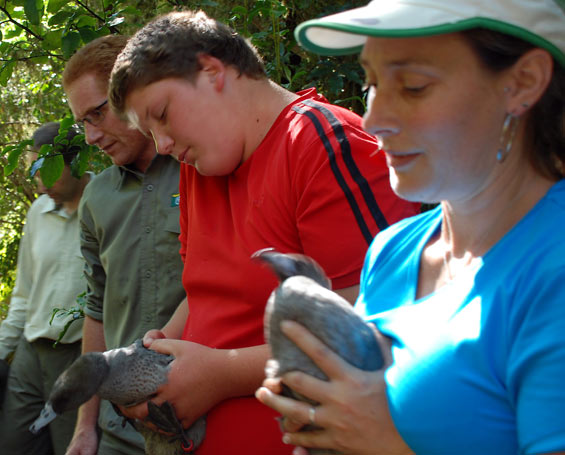 ‘We have at least 20 pairs currently in the Wangapeka-Fyfe Whio Security Site. The WHIONE programme has been important in building whio numbers from just three individuals when the whio programme began on the Wangapeka catchment’s Rolling River in 2003.

‘It is challenging breeding young whio in the wild. Nests in rivers can be destroyed by floods and when stoat numbers are high they breach the protective lines of traps in the area and attack females and their young.

‘Unfortunately, whio breeding in the site has not fared well over spring and summer due to a flood around New Year and high stoat numbers may have led to increased predation of ducklings. With few wild young whio raised we are very glad to have these eight new arrivals.

‘We are very grateful to Genesis Energy, Isaac Conservation and Wildlife Trust which runs Peacock Springs, and Air New Zealand, which flew the ducks to Nelson, for supporting whio and the WHIONE programme in the Wangapeka-Fyfe area.

“We are also very appreciative of the help of local volunteers who check and re-bait 270 of the 950 stoat traps covering 73-kilometres of waterways. The volunteers include Tapawera Area School students who look after nearly 100 traps. Fittingly, students who will be working hard to help safeguard the whio helped in releasing the eight young birds back into their natural home.

‘The students’ and other volunteers’ efforts are without a doubt helping to protect the whio from stoat predation. Their enthusiasm in caring for whio by maintaining trap-lines and helping to ensure a future for the threatened ducks in this part of Kahurangi National Park is tremendous.’

Tapawera students will also have the chance to take part in a school competition to name five of the newly-arrived whio.

Genesis Energy and DOC have partnered together in a five year programme to secure the future of this threatened native bird. Operating under the name of Whio Forever this partnership is implementing a national recovery plan to protect whio breeding areas and habitat.