The draft CMS is currently out for public comment. Ken Stewart, acting Otago Conservator, said “the natural and landscape values of these wetlands make them good candidates for recognition as Wetlands of International Importance under the Ramsar Convention, but it is something that we would want to discuss with landowners, Ngāi Tahu, Otago Regional Council, Fish and Game, and others in the community. We are floating these ideas in our draft CMS and would welcome feedback as part of the consultation process”.

The Taieri Scroll Plain, a large wetland in the Maniototo and Styx Basins that is part of the upper reaches of the Taieri River, is “the only one of its kind in New Zealand”, Mr Stewart said.

The Taieri River is the fourth longest river in New Zealand and follows an s-shaped course from the Central Otago block mountains to the sea near Dunedin. The upper catchment is a mosaic of tussock grasslands, farmland, wetlands and bogs which help store water and release it slowly into the river, protecting fish, wildlife and cultural values, and water sources. The river is well known for a number of rare native fish species and is an important trout fishery.

Less well known is that the Taieri River has several internationally and nationally recognised geological and landform features. 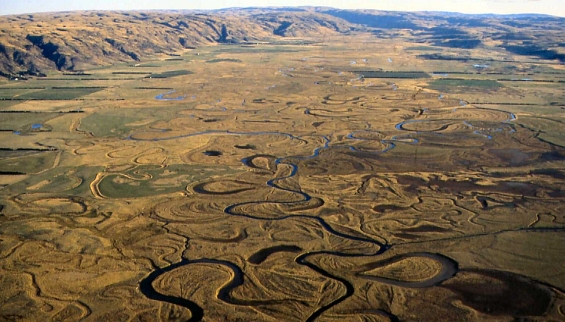 The Taieri Scroll Plain, a large wetland in the Maniototo and Styx Basins

The Ramsar Convention recognises Wetlands of International Importance as being important for their economic, cultural, scientific and recreational value.

Mr Stewart said the department looked forward to hearing people’s thoughts about wetlands and discussing these ideas with the community.

You can view the draft Otago CMS on the DOC website. You can have your say by filling out a submission form on the webpage. Submissions are open until 13 September 2013.

The Convention on Wetlands of International Importance (Ramsar Convention - RC), is an intergovernmental treaty for the conservation and wise use of wetlands and their resources.

The RC mission is “the conservation and wise use of all wetlands through local and national actions and international cooperation, as a contribution towards achieving sustainable development throughout the world”. There are specific criteria to guide the selection and designation of Ramsar wetlands of international importance.

This is part of a relatively unmodified wetland complex that occupies several square kilometres on the uplands of the southern Garvie Mountains in the south-central South Island.

Mires are wetlands dominated by grasses, mosses and peat-forming plants. They have distinctive patterns of open pools and clumps of low-stature vegetation.

Lakes Waihola and Waipori and their associated wetlands are the most significant waterfowl habitat in Otago. The lakes are shallow and drain through an extensive swamp into the Waipori River then the Taieri River. The swampland includes vegetated islands, lagoons, shallow pools, meandering channels and backswamps.

The 2000 ha wetland complex hosts more than 10,000 waterfowl, has regionally significant whitebait, eel and sports fisheries, and is habitat for many threatened and endangered species of plants, fish and birds. The Sinclair Wetlands between the two lakes is protected under a QE II covenant.

There are concerns about the declining water quality, particularly from sewage, stormwater and farm discharges.