A $10 bounty on great white butterflies is being introduced by the Department of Conservation for the school holidays to help eradicate the pest from the Nelson area, Conservation Minister Dr Nick Smith announced today.

Date:  25 September 2013 Source:  Office of the Minister of Conservation 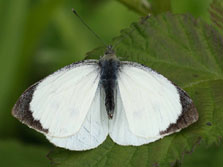 A $10 bounty on great white butterflies is being introduced by the Department of Conservation for the school holidays to help eradicate the pest from the Nelson area, Conservation Minister Dr Nick Smith announced today.

“We want great white butterflies dead not alive. They are an unwelcome pest and pose a major threat to endangered native cresses, and garden and commercial plants like cabbage and broccoli,” Dr Smith says.

“To date they have only been found in Nelson Tasman but we must do everything we can to ensure they don’t become a permanent widespread pest. Female great white butterflies can lay as many as 750 eggs so every butterfly killed potentially stops up to another 750 butterflies emerging.

“The peak period for the butterflies emerging from pupae this spring coincides with the school holidays. It’s a great opportunity to involve school children in conservation, as well as earning some extra pocket money. It also has the potential to help us curb a spring breeding surge.

“The bounty is not limited to children. Adults are also invited to catch and kill great white butterflies and bring them in to claim their bounty.”

Butterflies should be put in a jar or sealed plastic bag and stored in the freezer so they don’t go mouldy until they can be dropped off to DOC’s Nelson office on weekdays between Monday 30 September and Friday 11 October. The bounty will not be available at other times and is only for adult butterflies.

“Great white butterflies are mostly found in and around the Port Hills area of Nelson, but have been found as far out as Stoke and the Glen,” Dr Smith says.