More than 400 bags, filled with goodies for boaties and campers, are among the latest weapons being used by Project Island Song to keep the islands of the eastern Bay of Islands pest-free.

More than 400 bags, filled with goodies for boaties and campers, are among the latest weapons being used by Project Island Song to keep the islands of the eastern Bay of Islands pest-free.

"This is quite an achievement since more than 100,000 people visit them each year and rats and stoats can easily reinvade by swimming across from the mainland. This is the fourth year that these goody bags have been put together. They will be handed out by: 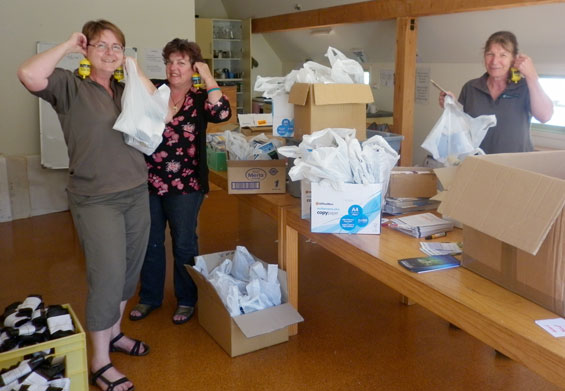 Each bag contains information about

"A big thanks needs to go to Cater Marine Opua who sponsored biosecurity messaging on their tide timetable and Burnsco Opua for donating floating key rings, also with the Stop, Check, Go (and have fun) messaging," Helen says.

These free bags are available on request from Helen Ough Dealy hodealy@doc.govt.nz

Project Island Song is a partnership between Guardians of the Bay of Islands Trust, Te Rawhiti hapu (Ngati Kuta and Patu Keha) and DOC.

The public can get involved by

If you have land on the mainland and want ot find out more about ways you can help restore your own land and protect the islands at the same time, contact John Booth (Eastern Bay of Islands Preservation Society) email: boothy3@yahoo.co.nz

The eastern Bay of Islands' mainland has its own pest-controlled buffer zone - Projects Strip, Points, Rakau and Noose and Necklace.

Established in support of Project Island Song, the Mainland Buffer Zone not only reduces the chances of reinvasion of the islands of Ipipiri by stoats and rats, but enhances local natural biodiversity. Local people are already experiencing the benefits seeing more bellbirds and increased numbers of tui in the buffer zone area.