As part of a day celebrating the survival of the takahē, Mitre10 Takahē Rescue has launched a nation-wide chick naming competition.

On the 20 November 2012, 64 years ago Dr Geoffrey (DOC) Orbell, crouching behind a tussock high in the Murchison Mountains of Fiordland, excitedly identified a bird which had been presumed extinct for 50 years – the takahē. As part of a day celebrating the survival of the takahē, Mitre 10 Takahē Rescue has launched a nation-wide takahē chick naming competition. 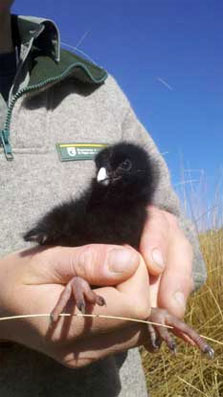 "Not many species have survived so long on the brink of extinction!" says Mitre10 General Manager Marketing Dave Elliott. "We reckon this is pretty remarkable and with only 260 takahē left every chick is a great result. We want to get everyone to join in celebrating this amazing survival tale and the arrival of the new chicks this season.

"The un-named chick is one of ten chicks hatched at Burwood Bush Takahē Breeding Unit near Te Anau this month. It will be reared through to at least a month old before it is moved to join the takahē family at the Te Anau Wildlife Park on Friday 14 December 2012, coinciding with the annual Mitre 10 Takahē Rescue Chick Picnic.

"Burwood Bush is currently home to 12 pairs of takahē whose offspring are used to build and boost takahē populations at pest-free sites around New Zealand. The takahē pairs are monitored by Department of Conservation (DOC) rangers to ensure that every pair has the opportunity to rear at least two healthy chicks.

Takahē lay one or two eggs at a time and often produce infertile eggs. DOC rangers move eggs and even chicks between nests to ensure each pair has the opportunity to raise at least two healthy chicks.

"If we remove eggs or even chicks from a pair of breeding takahē they will often build another nest and lay more eggs" says Takahē Recovery Programme Manager Phil Tisch. "This gives us a great opportunity to make sure every pair of birds can raise at least two healthy chicks. It also means we can boost our takahē population, and also make sure people get to see chicks by giving a chick to our infertile takahē at the Te Anau Wildlife Park."

The competition is open to all members of the public and every entry goes into the draw to win a camping prize pack from Mitre 10 worth $200. To enter visit the Mitre 10 Takahē Rescue Facebook page: www.facebook.com/Mitre10TakaheRescue