New Zealand fur seals have been sighted ashore along the Bay of Plenty coastline this week, as expected for this time of year.

New Zealand fur seals have been sighted ashore along the Bay of Plenty coastline this week, as expected for this time of year.

The Department of Conservation (DOC) has recently confirmed the existence of a local breeding population offshore at Motunau (Plate Island). This means that coastal residents and beach visitors are increasingly able to see both adult and juvenile animals in their natural habitat, lazing on the beach and playing in the water. 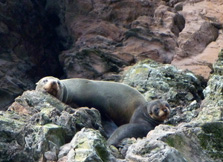 People need to know that seals carry infectious diseases and can deliver a nasty bite when threatened, so DOC suggests keeping 20 metres away and taking extra care to control your dog. Never touch a seal or feed them. It is illegal to harass or injure a seal.

New Zealand fur seal populations are recovering from catastrophic reductions due to commercial sealing in the 19th Century, and are expected to keep on increasing.

DOC’s Community Relations Ranger Pete Huggins says this could lead to our local coastline becoming more of a seal hotspot in the future. “Seals are marine carnivores that eat things like squid, octopus and barracoutta – mainly at night. Our local waters are plentiful, and these seals are on to a good thing by living here, just like we are. It’s important to let nature take its course and these seals will naturally come ashore to rest, and spend time in the shallows basking. In most cases there is nothing alarming going on. Seals’ biggest threats are humans and dogs; so we want people to control their pets and to give seals room, as these animals are fully protected by law.”

“A number of recent calls to the DOC emergency HOTline (0800 362 468) have been false alarms reporting sick or oiled animals. This is understandable because a seal’s natural behaviour is to sneeze and cough, with watery eyes, which can look like a human cold but is actually a result of their time at sea. Equally, seal colouring is often dark and greasy which can look like oil, and we’ve all seen the negative effects of oil recently. However there are no reports of oil in the water currently and thankfully no oiled wildlife has been confirmed for months.”

DOC has a minimum intervention policy with seals, only getting involved if the seal is seriously injured or is being harassed, or is entangled in something like a net or rope or is in a dangerous place such as a road. In these situations, DOC Rangers will attend and take necessary action. Otherwise it is important to let nature take its course.