The first orange-fronted parakeet / kakariki to fledge in the wild north of the Cook Strait in about 130 years has been confirmed on Tuhua (Mayor Island).

The first orange-fronted parakeet / kākāriki to fledge in the wild north of the Cook Strait in about 130 years has been confirmed on Tuhua (Mayor Island).

The orange fronted parakeet is listed as critically threatened and has been extinct in the North Island since the late 1800s.

In late 2009 Tuhua Trust welcomed the opportunity to provide a safe haven for these taonga by facilitating their return to the North Island once again with the support and gifting by Ngāi Tahu hapu, Ngai Tūāhuriri.

Now the project can confirm its success after Department of Conservation ranger John Heaphy sighted and recorded images of a juvenile bird on the island. 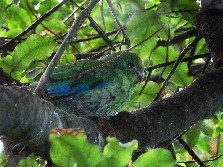 This first chick for Tuhua is too young for its orange-front to show!

Mr Heaphy said the youngster hadn’t been long out of a nest and he was able to watch it for several minutes before it flew about five metres and crash landed with wings outspread on the next branch.

He said it was likely other juvenile parakeets had also fledged this summer. So far 63 birds have been released with the support of the Isaac Wildlife Trust and BDG Synthesis Ltd since late 2009.

Tuhua Trust Board chair Magda Williams said, "This is tremendously exciting news and a major step towards achieving Te Whanau A Tauwhao ki Tuhua hopes that populations from Tuhua will assist in re-establishing the species back to the mainland.”

Ms Williams says, “Given its predator free status, Tuhua is a perfect habitat for the orange fronted parakeet and now we can see, that like the other endangered species on the island, they are thriving there.

“The Board is playing a major role nationally by contributing to the restoration of a number of threatened native bird species. It is also home to a small but thriving population of North Island kiwi as well as the pateke (native brown teal), tuatara and toutouwai (North Island robin),” she says.