A DOC officer collected a NZ fur seal pup from the couch of a private home in Welcome Bay, Tauranga last Sunday evening, and returned it to the wild.

A Department of Conservation officer collected a NZ fur seal/kekeno pup from the couch of a private home in Welcome Bay, Tauranga last Sunday evening, and returned it to the wild.

The seal had travelled from the nearby harbour, across a road, up a driveway, through a cat door and into the property owner's lounge, where it made itself comfortable on the couch.

The seal has been dubbed Lucky for its ability to cross busy roads unharmed.

DOC marine mammal expert Laura Boren says that it is not unusual for weaned pups to wander into unusual places. 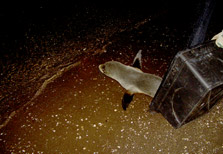 Lucky the seal returns to the wild“They commonly go up streams, into people’s gardens and so on but this is the first I'd heard of one going into a house.

“They are incredibly curious animals, and very agile. They can squeeze into little holes so a cat door would not present any issue and they are super adept at climbing rocks so a couch would be a piece of cake.“

She says that seal numbers around Tauranga are increasing so people may see more newly weaned pups on beaches.

“They can be skinny at this time of year but it’s vital you do not feed them.

“That leads to habituation where the pups start to beg and seek out human company. As they get bigger they can become a nuisance and potentially dangerous. It also makes it harder for them to integrate with other seals and interrupts their natural behaviour. People may think they are being kind by feeding a skinny pup but are actually killing them with kindness.”

Lucky the seal gets comfortable on the couch

NZ fur seals are believed to be breeding on Motunau (Plate) Island, which is approximately 12km offshore.

At this time of year, young seals are dispersing from the rookeries. Seal pups may often spend days at a time alone, whilst the mother is away foraging for food.

Seals usually occupy rocky shores in places that have some protection from heavy seas and are often found resting on Bay of Plenty beaches.

Occasionally they travel inland (usually via estuaries and waterways). When on land they can become disoriented and have been found on previous occasions in unexpected places such as backyards, drains and streets.

Seals are wild animals and the Department's policy is to return them to the care of their natural habitat.

Seals are known to carry infectious diseases and their teeth can inflict serious injuries, therefore members of the public are advised to keep their distance for the welfare of both parties.

Contact 0800 DOCHOT if the seal is in obvious trouble or in a particularly unusual location (as was the case in this instance).