The occasion has been marked with the first release of threatened native wildlife on Motutapu Island, including two breeding pairs of takahē – one of New Zealand’s rarest native birds.

Up to 20 tīeke, or saddleback, another native bird brought back from the brink of extinction, were also released. 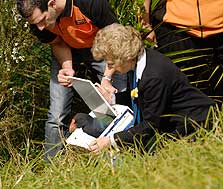 Ms Wilkinson says the release of endangered species in Auckland’s backyard was a big occasion.

“There are only 250 takahē left in the world and that we are able to release them in a safe sanctuary here in the Hauraki Gulf Marine Park is testament to the fantastic work the Department of Conservation has undertaken to rid these islands of pests.

“Motutapu and Rangitoto will now play a significant role in protecting our most endangered wildlife.

“Takahē were thought to be extinct until rediscovered in Fiordland in 1948. The grassland on Motutapu provides a good feeding ground for takahē and the island is big enough to hold up to 20 breeding pair. This would make it the largest population of takahë outside Fiordland.”

DOC has removed nine animal pests from Rangitoto and Motutapu. Possums and wallabies were eradicated in the 1990s. Ship rats, Norway rats, stoats, mice, feral cats, hedgehogs and rabbits have now been removed with the completion of a major eradication operation that began in June 2009.

As many as 30 species of threatened native wildlife are expected to be released onto the islands in the future, including kiwi, hihi or stitchbird, tuatara and several species of native reptile.

“As well as creating a valuable new conservation asset the investment in making Rangitoto and Motutapu pest-free sanctuaries will provide a tourism drawcard.

“Having rare and precious wildlife living on these iconic islands, just 30 minutes by ferry from downtown Auckland, enhances their appeal as a tourist destination for visitors from throughout the country and overseas.”