Slow and methodical work is winning the war against a voracious ant threatening some of New Zealand’s rarest and most unique native wildlife.

Slow and methodical work is winning the war against a voracious ant threatening some of New Zealand’s rarest and most unique native wildlife. 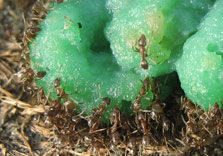 Stunning Tapotupotu bay and campground is just 20 minutes drive from Te Rerenga Wairua (Cape Reinga) and is part of the 18,886h Te Paki reserves; home to many of New Zealand’s’ rarest and most unique giant land snails, insects and lizards. All of this under threat from a ruthless predator – the argentine ant.

Department of Conservation Threats Programme Manager in Kaitaia, D.J. Neho, says despite their size, Argentine ants are on the top of the list of deadly threats to Te Paki reserves wildlife.

“Argentine ants build super colonies that cooperate with each other. They are relentless protein eaters which will wipe out any native insects in their path, along with snails, bird chicks and lizards,” says Mr Neho.

So yesterday afternoon a team of 10 DOC staff from Kaitaia, spent 6 hours methodically walking the 2.7 hectares of infested ground at a distance of 2 metres apart, laying a toothpaste-sized blob of bait every three steps. 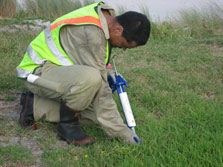 Department of Conservation Threats ranger in Kaitaia, Evan Ward, says it is slow and laborious work, over a range of terrain, including long kikuyu, manuka shrubland, and dunes, but if the bait isn’t laid properly they won’t get a second chance.

“We have the opportunity to get rid of these ants, so we are determined to get it right,” says Mr Ward.

Currently there is only one bait, called Xstinguish, which is effective against Argentine ants.

“The bait is a mixture of protein and sugar; the worker ants feed on the sugar and take the protein back to the queen.

Once the queen realises the new food source is toxic, she sends a message to the colony to stop eating it. Because Xstinguish is a slow acting poison, it takes about 6-8 hours before that happens. As long as the bait has been laid properly, by the time the message goes out the whole colony will have eaten the bait,” Evan explains.

The colony of Argentine ants was first discovered just under two weeks ago on the 3rd of February. As Argentine ants are attracted to moisture, the DOC team had to wait for a suitable weather window to ensure at least three fine days prior to, and following, the operation.

Another control operation will be carried out in 6-8 weeks to ensure any pupae that hatch following yesterday’s operation are destroyed. After that, the DOC team are cautiously optimistic that they will have freed Tapotupotu from the small honey-coloured menace.

However, DOC will continue to monitor the area on an annual basis, as they currently do with the whole of the Te Paki reserves area.

The campground has been closed throughout the operation, but the day area has been available for camping.

For anyone keen to help, the Department of Conservation advises checking your vehicle for ants, especially if you are planning a trip to a wilderness area. Fly spray can be used for small infestations. For larger colonies around your property, information on purchasing Xstinguish is available on the manufacturer’s website www.flybusters.co.nz.  For more information, or if you’re not sure what an Argentine ant looks like contact your local DOC office.