Rat tracks seen in rodent detecting tunnels have sparked a major search and trapping operation by the Department of Conservation (DOC) on Rangitoto Island in the Hauraki Gulf Marine Park.

Rat tracks seen in rodent detecting tunnels have sparked a major search and trapping operation by the Department of Conservation (DOC) on Rangitoto Island in the Hauraki Gulf Marine Park.

DOC are using rodent detecting dogs and have set 175 traps to catch the rat after the tracks were seen in a routine check of the rodent detecting tunnels that ring Rangitoto and neighbouring Motutapu Island. The tunnels are one of the biosecurity measures DOC has in place to protect the pest-free islands it manages in the marine park.

DOC has been treating Rangitoto and Motutapu as pest free after conducting an eradication programme to remove rats, mice, stoats, feral cats, hedgehogs and rabbits from the islands in 2009. Possums and wallabies were removed in the 1990s. 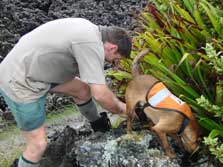 The pest eradication will enable the islands to become one of the country’s largest sanctuaries for endangered wildlife - like kiwi, takahe, and kaka - in the heart of Auckland. Removing the pests also protects native plants including New Zealand’s largest pohutukawa forest on Rangitoto.

“We found the rat tracks in a routine check of the rodent detecting tunnels that circle Rangitoto and Motutapu. This shows our pest monitoring and surveillance systems are working,” says DOC Auckland Area manager Brett Butland.

“The tracks were found near the Rangitoto wharf and we’ve set 175 traps in the area. We’re also combing the area with rodent detecting dogs. The operation will continue until we catch the rat.”

“Rangitoto is out of the swimming range of rats so it probably got onto Rangitoto from a boat such as a passenger ferry, private boat or kayak,” says Brett Butland.

Discovering the rat demonstrates the ever present risk of rats and other animal predators getting onto islands DOC has cleared of pests to create safe havens for endangered wildlife and plants. 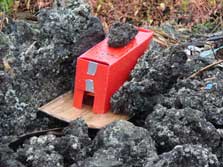 “DOC works hard to keep rats and other pests off the islands where we have carried out pest eradication but the reality is pest incursions like this will happen. It’s disappointing when this happens and we’re working hard, with help from the Auckland Council, to catch the rat on Rangitoto.”

“We want people to visit and enjoy these islands but the public needs to be aware of the risk of unwanted pests accompanying them onto these sanctuaries for rare wildlife and plants.”

“All boat users from ferry operators to kayakers must be on the alert for rats and other pests that can stowaway and make their way onto an island like Rangitoto,” says Brett Butland.

Boat owners can obtain rat traps for their boats from DOC by: