‘Conservation Conversations’ is a week-long expo of creativity where Northlanders can come together to share knowledge and experiences around freshwater and wider conservation themes.

On Monday 20 June, the Department of Conservation and the Far North Environment Centre, in partnership with Taipa Area School’s Matariki celebrations, will launch ‘Conservation Conversations’ - a week-long expo of creativity. Locals can come together to share knowledge and experiences around freshwater and wider conservation themes.

“The aim of the expo is to provide a space for people to explore freshwater themes and to discuss their aspirations for the future management of public conservation places in an interactive, creative way,” says Kylie. 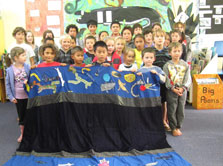 Children from Waiharara school with the
eel tapestry

A major attraction of the expo will be a giant eel tapestry created by children from all over the country. Children contributed pieces of art that express their understanding of long-finned eels and the importance of freshwater habitats.

Theresa Reihana, a gifted local artist, will also showcase a wonderful display of her artwork at the Oruru Hall from Wednesday 22 June to Friday 24 June. Other local arts and crafts inspired by the freshwater environment will also be on display.

Far North Environment Centre coordinator and expo co-organiser Soozee McIntyre says aside from the daytime activities a couple of evening treats are also in store for participants.

“On Thursday night at Swamp Palace we have local identity Kevin Matthews sharing his knowledge on the importance of wetlands”, says Soozee.

Kevin Matthews is well known to most Far Northerners for his untiring commitment to caring for the local environment. A passionate advocate for freshwater conservation, Kevin is also extremely knowledgeable about plants and animals in the area. He even has a rare endemic orchid named after him!

Then on Friday night Swamp Palace will transform itself into its former role as the local cinema. A 'mystery movie night' features a special screening of a water themed movie, accompanied by a complimentary home-made soup supper. Entry is FREE, although a koha would be appreciated towards costs.

‘Conservation Conversations’ will be located in the Taipa School Whare Monday 20 June and Tuesday 21 June from 10.00am – 3.00pm daily. The expo will then move into Swamp Palace (Oruru) for the rest of the week from Wednesday 22 June to Friday 24 June from 10.00am - 6.30pm daily.