A restoration project on Motuihe Island reached a major milestone with primary school children planting the 300,000th native tree on the island since the project began in 2003.

A restoration project on Motuihe Island, in Auckland’s Hauraki Gulf Marine Park, reaches a major milestone today (Friday April 8) when 130 primary school children will be involved in planting the 300,000th native tree planted since the project began in 2003.

The Year 5 and 6 Kelston Primary School students spent three and a half hours on the island and planted 680 native trees under the supervision of Motuihe Trust volunteers. They planted wharangi, karamu, cabbage tree, harakeke, taupata, puriri, houpara, ngaio, mahoe, manuka and karaka

The tree planting is part of the Motuihe Restoration Project, a partnership between the Motuihe Trust and the Department of Conservation.

The project involves restoring native forest on the island to provide a home for rare native birds, lizards, insects and plants. Historic sites are also being restored and visitor facilities built so New Zealanders and tourists from overseas can enjoy Motuihe’s unique features. 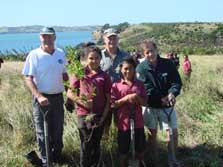 “Planting 300,000 native trees on Motuihe in just 9 years is a fantastic achievement,” says DOC’s acting Auckland Area Manager Jonathan Miles. “We thank the trust and their volunteer planters for the great conservation work they’re doing on the island.”

“Together with the trust we’re establishing Motuihe as a wonderful destination to enjoy right in the heart of Auckland,” says Jonathan Miles.

Motuihe has been a pest free sanctuary for native wildlife and plants since 2004 after DOC removed rats, cats and rabbits from the island. Monitoring and trapping tunnels ring the island to keep it pest free. Dogs and other pets are also kept off the island.

“Removing rats and other pests has enabled us to move endangered species such as little spotted kiwi, kakariki, saddleback, bellbirds and shore skinks onto Motuihe. The trust’s tree planting is creating a habitat for this rare wildlife to increase in number,” says Jonathan Miles.

Motuihe Trust chair John Laurence says about 10,000 volunteers have been involved in the planting since the project began in 2003.

“We’re grateful to all the volunteers who’ve planted trees on Motuihe over the last nine years. Our record for a day’s planting was 22,400 trees planted by 350 volunteers,” says John Laurence.

“A lot of people have worked hard to make Motuihe a special place that locals and visitors from throughout New Zealand and overseas can enjoy,” says John Laurence.

Auckland Council member Mike Lee, and a founding member of the Motuihe Trust, says “Thousands of Aucklanders armed only with spades having lovingly rebuilt Motuihe’s forest ecosystem from the ground up. It’s a noble achievement.”