Powelliphanta snails still on the menu in Hawke's Bay

This month the Department of Conservation staff and volunteers successfully surveyed two sites for the nationally endangered Powelliphanta 'maungaharuru' a native carnivorous snail in the Maungaharuru Ranges.

This month the Department of Conservation staff and volunteers successfully surveyed two sites for the nationally endangered Powelliphanta 'maungaharuru' a native carnivorous snail in the Maungaharuru Ranges.

“Powelliphanta are one of our most amazing native invertebrates” said Mark Melville, DOC Ranger. “They are carnivores, giants of the snail world, with some species being able to reach the size of a man’s fist. They can live up to 20 years and they lay eggs that look like small bird’s eggs”. Unfortunately their homes have been destroyed by humans and trampled by grazing animals. They are also a delicacy item for introduced animals such as possums, pigs and rats. 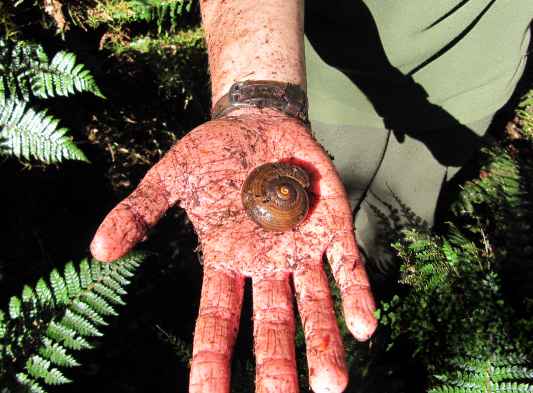 These snails are more common in moist high-altitude forest, like the Maungaharuru Ranges. In this year’s survey 75 live snails were found as well as 12 shells remains. The last survey was done in 2005 when 51 snails where found as well as 12 shells. In both years the shells have shown little sign of predation by introduced animals, which is good news for the snails and native birds in the area.

“We are particularly exited about the findings of this year’s survey. Not only because we found more snails, but because we managed to take DNA samples from 4 of them. We can then see how the Maungaharuru population compares genetically with other Powelliphanta snails” said Mark. The Maungaharuru population, though known about for more than 60 years, still hasn’t been properly named, and these samples should help rectify this.

The snail surveys were done in Taraponui and Cashes Bush in the Mangahururu Ranges in 20m x 25m survey plots.