A message to whitebaiters: Check, clean and dry

The Department of Conservation is reminding Hawke's Bay whitebaiters to check, clean and dry their nets and other gear when moving between waterways. This will help slow the spread of freshwater pests and potentially didymo during the whitebait season.

The Department of Conservation is reminding Hawke's Bay whitebaiters to check, clean and dry their nets and other gear when moving between waterways. This will help slow the spread of freshwater pests and potentially didymo during the whitebait season.

Although didymo has yet to be detected in the North Island, DOC officer Helen Jonas urges all river, lake and stream users to get used to checking, cleaning and drying all gear before moving it to another waterway. She says these three steps are easy to follow.

“Washing equipment is as simple as spraying or dunking it into a solution of 5 percent detergent so it is thoroughly wet and then leaving it to dry before using it again. We have spray bottles and soap available for free at our Napier and Ongaonga offices too,” she said. 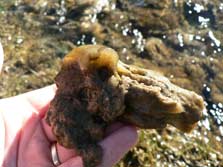 Didymo, commonly known as rock snot, has taken over many South Island rivers since it was first reported in 2004.  It is an invasive alga that can spread from one river or lake to another by the movement of water, equipment, clothing and any other damp item.  A microscopic pest, it can be spread by a single drop of water. Even if you can't see it you could be spreading it.

Didymo can be a problem for whitebaiters, clogging nets as it floats down rivers. Unfortunately freshwater users and their activities are the main cause of spread.

Biosecurity New Zealand has declared the entire South Island a Controlled Area for Didymo. This means waterways remain open to angling and other recreational activities, but people are legally obliged to prevent the spreading of didymo.

To prevent the spread of didymo you must check, clean, and dry gear when going from one waterway to another, everywhere in New Zealand. It is in New Zealand's best interests for you to treat every waterway like it is infected with didymo.