One of the kiwi re-introduced by the community into the Rimutaka Forest Park has been killed by a dog, highlighting the importance of keeping dogs on a lead in the park.

One of the kiwi re-introduced by the community into the Rimutaka Forest Park has been killed by a dog, highlighting the importance of keeping dogs on a lead in the park.

The death of Fern – the first kiwi to die from predation in the park - has distressed members of the Rimutaka Forest Park Trust (RFPT), which reintroduced kiwi to the park with support from the Department of Conservation (DOC). An autopsy has confirmed the likely culprit was a dog.

“If that dog had been kept on a lead the kiwi would still be alive. It’s simple really.”

DOC Poneke Area biodiversity programme manager Peter Simpson reinforced her comments, noting that it only takes seconds for a dog to crush a kiwi. 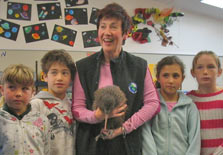 “Most owners would never expect their dog to be capable of such a thing. But the sad truth is that the scent of kiwi make them irresistible to dogs, and kiwi are incredibly fragile.”

As well as keeping dogs on leads, Mr Simpson said it was important for people to know where their dog is at all times and keep them inside or tied up at night.

There are plenty of places within the Forest Park that do not have kiwi, including a special dog exercise area in the Catchpool valley, so the Trust and DOC ask people to respect the no dog area set aside for kiwi and to abide by the rules for it. They should also be mindful of the legal consequences of killing our national icon and other protected wildlife. A person convicted of such an offence under the provisions of the Wildlife (Penalties and Related Matters) Amendment Act 2000, could face up to six months in prison or be fined up to $100,000. 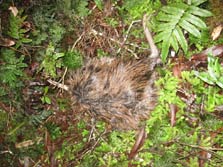 Fern, a two-year-old male kiwi named by Fernlea School in Wainuiomata, was released into the park in May after being hatched and raised at Rainbow Springs as part of the BNZ Operation Nest Egg™ programme.

‘He was a beautiful and healthy bird, weighing around1.7kg” said Ms McLaughlin. “We are working towards having a self-sustaining population of kiwi in the park and he will be a real loss to the breeding stock.”

Kiwi were first re-introduced by the trust into the Rimutaka Forest in 2006 and nearly 30 adult kiwi now roam its forested slopes.

“Following Fern’s death we have double checked to ensure that the remaining kiwi are alive and well,” Ms McLaughlin said.

“The only way to ensure this doesn’t happen again is for people to understand that hunting is a natural behaviour for a dog. The responsibility lies with humans to keep dogs on leads in the park. ”

As part of its commitment to kiwi in the park, the trust runs twice yearly kiwi aversion training for pet and hunting dogs, which teaches them to avoid chasing or attacking kiwi in the wild. The Trust also runs an extensive predator trapping programme and regularly monitors the kiwi population. For more information about future Kiwi Avoidance Training plans or to volunteer as a trapper contact Melody on +64 4 564 6213 or 027 452 4982.

BNZ Save the Kiwi Trust

BNZ Operation Nest Egg™ is a powerful tool to reverse the decline of key kiwi populations. Eggs and chicks are harvested from nests to save them from stoats and cats. The young kiwi are returned to the wild when they weight about 1kg, big enough to fight off these predators. More than 1000 kiwi chicks have been returned to the wild since the programme began in 1994, with captive facilities and hundreds of field workers from DOC and community groups throughout the country contributing to its success. The BNZ Operation Nest Egg™ egg harvesting>chick rearing>return to the wild technique was developed for kiwi through research funded solely by Bank of New Zealand and is now also used in other species recovery programmes.