A beach clean-up at Turakirae on Wellington’s rugged south coast yesterday eliminated a couple of truckloads of rubbish with the potential to harm marine wildlife.

A beach clean-up at Turakirae on Wellington’s rugged south coast yesterday eliminated a couple of truckloads of rubbish with the potential to harm marine wildlife.

It may also confuse archaeologists of the future by removing traces of Homo sapiens boy racer, joked Poneke Area Department of Conservation ranger Wendy Newton, who organised the Seaweek event.

She was referring to numerous car parts that were among the items collected from the beach by DOC staff and volunteers, including young Americans participating in the Global Volunteer Network New Zealand Nature Programme. 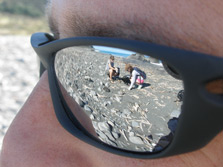 They removed a large amount of broken glass, tyres and wheels, a bumper, pieces of metal, shoes, disposable nappies and fishing line from this dynamic stretch of coastline, one of the world’s most important geological sites because of its sequence of five earthquake raised beaches.

“It’s a beautiful place,” remarked Jamie Poe from Chicago. She and her friend Devon Rood from Phoenix Arizona found it “weird” that people would litter their beaches. The landlocked pair treasure their opportunities to visit the ocean.

“Having a landfill next to the beach doesn’t do it much good,” said Jamie. “It surprises me that people don’t take better care of these areas. Where I live you can’t just drive down to the ocean and spend a day on the beach. If you can, why don’t you want to preserve it so you can keep bringing your children and grandchildren there.”

A highlight of the day was a talk by New Zealand Geographical Society president Professor Michael Crozier who explained how Turakirae Head had been described as one of the best localities in the world to understand how mountain ranges are formed. 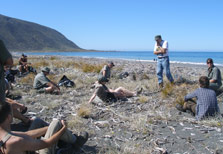 A series of five beach ridges (originally formed as storm waves throw up shingle on the shoreline) are today preserved at different heights above the present sea level on a broad coastal plain. The oldest one which was forming up to about 7000 years ago has been lifted up from the water’s edge to  an elevation of 30m by  four successive earthquakes. The earthquakes occur about every 2000 years, and were all probably similar to the last one that occurred in 1855 AD (often referred to as the Great Wellington Earthquake) with a magnitude of about 8 on the Richter scale.

“They’ve yielded two important pieces of information. First, that as the Pacific and Australia crustal plates collide, the stress is released partly by uplift that occurs when a fault ruptures and an earthquake occurs (this is referred to as coseismic uplift). So mountains are not built by gradually rising, as we once thought, but instead by a series of jumps.

“The second piece of useful information is that we can now measure the hazard presented by movement on the Wairarapa fault (the one that caused the Great Wellington Earthquake) – the beaches give a measure of the size and frequency of earthquakes. The instrumental record is much too short to reveal this important information.

“So within a short distance of the city, in a spectacular coastal environment, lies one the most valuable sets of landforms in the world. They are however very vulnerable; some of them have been buried by landslides and alluvial fans and some sections have been destroyed by roading and  removal of gravel.” ENDS