The start of the seal pup weaning season - and a pup "rescue" attempt - has prompted a reminder from the Department of Conservation that seals are resilient and usually best left to their own devices.

The start of the seal pup weaning season - and a pup "rescue" attempt - has prompted a reminder from the Department of Conservation that seals are resilient and usually best left to their own devices.

A seal pup, believed to be sick, was recently picked up in Picton and brought to a Wellington vet by a member of the public. However DOC biodiversity programme manager Peter Simpson says taking the seal out of its environment and transporting it to Wellington, presumably by ferry in the back of a car, would most likely have caused it further stress and suffering . The seal eventually had to be euthanased. 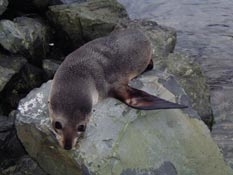 Mr Simpson stressed that it was not appropriate for members of the public to attempt to move, or assist adult seals or pups.

"Most seals reported as injured or sick are just resting and should be left alone.

“During storms, Cook Strait is a bit like a washing machine and seals can become tired.  They come ashore for a bit of rest and sleep. At this time of year there are quite a few young pups that have 'left home' and are on the move. They are quite capable of looking after themselves.”

Mr Simpson said seals should be watched and enjoyed respectfully from a safe distance. Even if they are sick or injured they may be capable of inflicting serious injury.

"They also harbour infectious diseases such as pneumonia, tuberculosis and salmonella that can be transmitted to humans and are difficult to treat."

NZ fur seals have been found in unexpected places such as backyards, drains and streets and earlier this month a seal pup that had swum up the Hutt River and climbed over the stop bank had to be "bailed" out of the Lower Hutt police station. Mr Simpson was phoned around 5.30am by police after they had removed the seal pup from a carpark with a request to collect it from the police station. He was bemused to find it resting peacefully in a police cell. The pup was relocated  to Eastbourne beach.

DOC’s relationship with seals is based on minimum intervention, only coming to the aid of seals if they are severely injured, entangled in marine debris, or under threat from people or dogs, which may have been the case for this youngster had the law not intervened.

How you can help seals