A milestone has been achieved in a 30-year effort to restore the habitat for the Chatham Islands black robin, one of the world’s most famous and endangered birds.

A milestone has been achieved in a 30-year effort to restore the habitat for the Chatham Islands black robin, one of the world’s most famous and endangered birds.

Last weekend the 100,000th tree since 1991 was planted on the remote Mangere Island in the Chatham Island archipelago. Black robin were moved there from a nearby smaller island by the former Wildlife Service in the 1970s, in a last ditch attempt to save the species from extinction. Population numbers had plummeted to just five birds as a result of predation by cats.

Work to restore the island has been on-going for more than 30 years. In recent times it has been the focus for intensive restoration and revegetation to recover forest and provide habitat for the robins.

Chatham Island akeake trees (Olearia traversiorum) have been raised from seed and cuttings collected from nearby islands and then transferred to Mangere. The work has been coordinated by the Department of Conservation but much of the planting has been done by the local community especially Liz and Bruce Tuanui. Bruce was among the six people present for the planting of the 100,000th tree last weekend.

“Being part of the enhancement of the conservation values and seeing the change over the 16 years has been is extremely rewarding” says Bruce Tuanui. 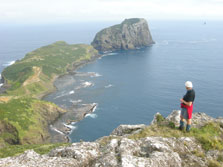 The island is also home to many of New Zealand’s other threatened animals and plants, including Forbes’ parakeet, the Chatham Island forget-me-not, Cook’s scurvy grass and Chatham Island tui, all of which are on the brink of extinction.

“The work going on here is outstanding and will benefit New Zealanders and New Zealand wildlife for years to come.”

Find out more about the black robin