Help save a species from extinction

Ever seen a fish climb out of a bucket? For some of our more threatened freshwater species, that’s exactly the escape they attempt.

Ever seen a fish climb out of a bucket? For some of our more threatened freshwater species, that’s exactly the escape they attempt. Rare species like kōaro and shortjaw kōkopu are amongst our best climbers, and can climb straight up a vertical surface, if it’s damp enough.

They can even negotiate the side of a whitebaiter’s bucket, although often not all the way up. “This comes in handy if you want to pick your rare from your fry”, says Department of Conservation ranger Hannah Rainforth. In a bucket of whitebait catch, you’ll likely find five species – inanga (‘whitebait’), banded kōkopu, short-jaw kōkopu, giant kōkopu, and kōaro. Inanga are poor climbers, and will stay swimming around in the bucket. But when the oxygen in the water starts to drop, you might find the others literally climbing the walls. “After the fish have been in there a while, their respiration gradually uses up the oxygen in the water. This spurs them into action, and they seek out better, more oxygenated water. And that’s a helpful way of telling one small, transparent indistinguishable fish from another”, explains Ms Rainforth.

It’s also a helpful way of saving a species from extinction. 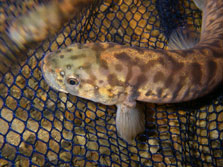 Of the five whitebait species, inanga are most common. They are not so fussy about their habitat and can often be found in lower catchment waters. But giant kōkopu prefer swampy and heavily vegetated streams, while short-jaw kōkopu, banded kōkopu and kōaro prefer fast flowing rocky streams with forest cover. All of these whitebait species spend part of their life at sea, which means they need a clear path to travel between habitats.

The traditional kiwi pastime of whitebaiting is dependent on having sustainable native fish populations, but the long-term survival of our native fish, like those that make up your whitebait catch, is under threat. The amount of habitat is shrinking as wetlands are drained, streamside vegetation is removed and barriers to fish passage are placed in waterways. Pollution and introduced pests also have a big impact on native fish populations.

If you want future generations to be able to enjoy whitebaiting, keep an eye on your bucket while you are tending your net this season. “If you spot any fish making the mountainous climb up the side of it, scoop them out and release them”, advises Ms Rainforth. “That way, you still get a fritter, and our rare and threatened species get to live a day longer”.

Whitebait season starts 15th August. Whitebaiters are reminded that regulations are in place to help protect the future of both the fish and one of New Zealand’s best loved recreational pursuits.