In preparation for the Caspian tern breeding season, Wairarapa’s Onoke spit has been cleared of rubbish posing a threat to wildlife, including tangled fishing line, wire, tyres, and even a fridge.

In preparation for the Caspian tern breeding season, Wairarapa’s Onoke spit has been cleared of rubbish posing a threat to wildlife, including tangled fishing line, wire, tyres, and even a fridge.

More than 40 volunteers, including staff from the nearby Wharekauhau Estate, helped the Department of Conservation comb the dunes for rubbish washed down the rivers and off boats.

DOC community relations programme manager Amanda Cosgrove was impressed by the reduction in refuse from last year and the enthusiasm of volunteers. 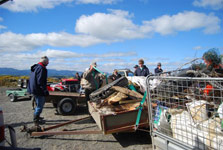 “Last year we collected close to 50 tyres and two tonnes of rubbish.  Thankfully this year we only collected around a dozen tyres and about half the rubbish with highlights including a fridge, large amounts of entangled fishing line and enough batons and wire to build five fences with.”

The team covered the spit in half the time and then headed down Ocean Beach to Wharekauhau, where hungry workers were treated to a barbeque lunch.

“It’s a great opportunity to meet such a variety of people wanting to participate,” says Amanda.

“And it’s very satisfying to get it all to the tip and see it disposed of properly.”

The group is planning for an annual August beach clean-up in preparation for the spring breeding season and influx of recreational visitors.

“It’s also a reminder to people to watch their fishing gear and what floats down the rivers of Wairarapa as it does wash up somewhere,” says Amanda.

The next beach clean-up is part of Conservation Week from Lake Ferry on 14 September.